If the walls at the Formosa Café could talk, they’d regale any lunch, dinner or happy hour crowd with tales from Hollywood’s heyday, when Marilyn Monroe, Lana Turner, Frank Sinatra and Clark Gable used to stop in. 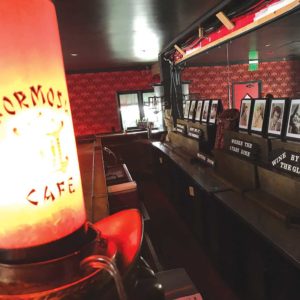 The new operators of the Formosa Cafe, 1933 Group, led tours through the venue last year to promote its bid for $150,000 from a national contest. (photo by Luke Harold)

After a few months of speculation over the the building’s fate, the 1933 Group secured a lease of the building in spring 2017, and it’s months away from a targeted February reopening.

Bobby Green, partner at the 1933 Group, also used to be a regular at the Formosa, located at the intersection of Santa Monica Boulevard and Formosa Avenue, during the 1990s. In the past year, his company has been working to secure the necessary permits to complete the work that needs to be done.

“It’s been a rollercoaster of challenges,” Green said.

But the new Formosa will ultimately be judged on how well it encapsulates the Hollywood lore from the Formosa’s past, when movie stars, singers and mobsters commingled for untold nights of revelry.

To that end, the 1933 Group is working with the grandson of former owner Lem Quon to restore autographed celebrity photos and other artifacts that adorned the walls of the Formosa for decades. And they weren’t just customers. Plenty of the Formosa’s famous denizens helped keep the café going about 30 years ago, when it faced the threat of demolition.

In 1991, actors Christopher Lloyd and John Cusack, two of the restaurant’s more contemporary regulars, led informational pickets and looked into protecting the building with landmark status after Warner Bros. cancelled plans to replace it with a parking structure.

The entertainment industry has also paid tribute to the Formosa in several memorable movie appearances. In “L.A. Confidential,” an actress playing Lana Turner threw a drink in the face of a detective after he accosted her and an actor playing Johnny Stompanato, a Mickey Cohen associate.

“The movie ‘L.A. Confidential’ comes in here and all they do is set up cameras and shoot, there’s no set design needed,” said Alison Martino, creator of the Vintage L.A. social media pages, last fall when tours of the interior were open to the public. “Hollywood movie studios spend thousands of dollars to have something look like this on their movie sets, and we have it right here.”

The 1933 Group plans on staying true to the restaurant’s traditional Chinese and Thai cuisine. 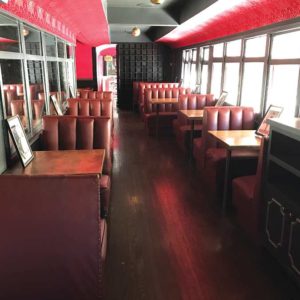 He added that the executive chef will have a lot of discretion to shape the menu.

One of his business partners, Dimitri Komarov, said last year, after reopening plans were announced, that the new Formosa would offer a “modern twist” to the Mongolian beef, Beijing chicken, pad thai and other popular dishes from its previous life.

Through 20 years in business, 1933 Group has created its own niche bringing back some of L.A.’s oldest, unique venues, including the barrel-shaped bar Idle Hour in North Hollywood, Highland Park Bowl and Sassafras in Hollywood. Tail o’ the Pup, a hotdog-shaped hotdog and burger stand that used to be in the Beverly Grove area, is the company’s latest undertaking.

“It’s much more rewarding than building out a new space,” Green said.

Several key details of Formosa’s origins have been lost to history. Its architect and builder are unknown, according to the city of West Hollywood’s historic preservation records. The construction date is estimated between 1920-29. But the stories that have persevered through the years – such as Elvis giving a Cadillac to a waitress and John Wayne sleeping over and cooking eggs the next morning – have defined its legacy.

1933 Group is compiling a book about the Formosa Cafe’s history that will include stories from its past patrons. So if you were a famous actor, singer or associate of an L.A. organized crime family who used to frequent the place, or just one of many Angelenos who used to stop by for lunch, dinner or a few drinks, visit theformosabar.com to share your story.

Park(ing) Day encourages people to think outside the spot

Zombies, Ghouls, Diapers: How horror films prepared me for twins