Everything is just ‘Beautiful’ at the Pantages

“Beautiful – the Carole King Musical” returns to the Hollywood Pantages Theatre for a limited three-week engagement now until Sept. 30. 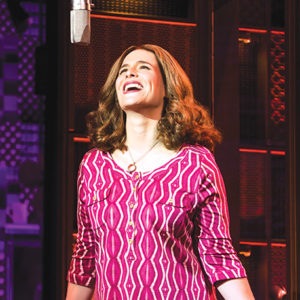 “Beautiful” tells the inspiring true story of King’s remarkable rise to stardom, from being part of a hit songwriting team with her husband Gerry Goffin, to her relationship with fellow writers and best friends Cynthia Weil and Barry Mann, to becoming one of the most successful solo acts in popular music history. Along the way, she made more than beautiful music, she wrote the soundtrack to a generation.

Her ablum “Tapestry” made her a household name in the 1970s, but the prolific composer began writing songs when she was just a teenager.

At 17, she and Goffin wrote “Will You Still Love Me Tomorrow” which was recorded by The Shirelles.

After her marriage failed, and King is faced with adversity, she pulled up her sandal straps and pushed herself beyond the bebop tunes she wrote for Don Kirshner for so many years. The result is her “Tapestry” album that soared to the top of the charts. It became one of the best-selling albums of all time and is beloved by generations. With more than 25 million albums sold, “Tapestry” remained the best-selling album by a female artist for a quarter century, and King went on to amass three other platinum and seven gold albums.

The “Beautiful” cast will be led by original first national tour stars Sarah Bockel as King, Alison Whitehurst as Weil and Jacob Heimer as Mann, and welcomes Dylan Wallach as Goffin, James Klow as Kirshner and Suzanne Grodner as Genie Klein.

With a book by Tony and Academy Award nominee Douglas McGrath, direction by Marc Bruni and choreography by Josh Prince, “Beautiful” features a stunning array of beloved songs written by Goffin and King, and Mann and Weil. The show opened on Broadway at the Stephen Sondheim Theatre in January 2014, where it has since broken all box office records and recently became the highest grossing production in the theater’s history.

The Pantages is located at 6233 Hollywood Blvd. For information and tickets, visit hollywoodpantages.com.

Discover Tokyo’s past and present