The Los Angeles Planning Commission on Sept. 13 voted to support the Crossroads Hollywood project, which will bring 950 apartments, 308 hotel rooms and 190,000 square feet of commercial space to Sunset Boulevard near Highland Avenue. 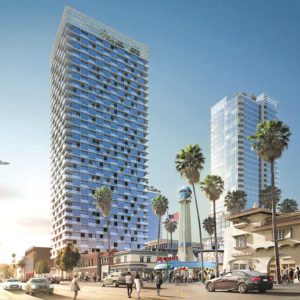 The Crossroads Hollywood project would bring apartments, commercial space and a new hotel to Hollywood while retaining the existing Crossroads of the World complex on Sunset Boulevard. (photo courtesy of Harridge Development Group)

The new $1 billion Crossroads Hollywood project would include a 26-story hotel and two residential towers with 105 affordable housing units for people with very low income. The project would be built on approximately eight acres of land around the Crossroads of the World complex, which is recognized for its tower with a spinning globe and a group of buildings designed to look like a ship. The Crossroads of the World complex would be retained in the new project, along with a nearby building on Sunset Boulevard that formerly served as the headquarters for the Hollywood Reporter.

“We are thrilled that the L.A. City Planning Commission has approved this project.  Crossroads Hollywood will be transformational for the Hollywood community, revitalizing a long overlooked area of the city,” said David Schwartzman, president and CEO of Harridge Development Group, the project developer. “This will be a true mixed-use project, where all Angelenos will be able to live, work, stay and play.”

Los Angeles City Councilman Mitch O’Farrell, 13th District, supports the Crossroads Hollywood Project. Last week, he announced a deal had been brokered with Harridge Development Group. Residents of the nearby Selma Las Palmas Apartments, which would be razed to make way for the Crossroads Hollywood project, would be allowed to move into units in the new complex. The project would replace approximately 80 existing apartments.

Glenn Gritzner, a spokesman for Harridge Development Group, said only approximately 40 people currently live in the Selma Las Palmas Apartments. They will have to find housing while the project is being built but would be allowed to return and live in either an affordable unit or a market-rate apartment at their current rent under the city’s Rent Stabilization Ordinance if they do not meet affordable housing requirements.

“Crossroads Hollywood is a project that is deeply committed to the Hollywood community,” Schwartzman added. “Our team is dedicated to ensuring that existing tenants of the residential apartments are welcomed back into the Crossroads community at rent-stabilized levels. Working to ensure the existing tenants had the option to return was very important to us.”

“This project will bring much-needed housing, especially a net-gain of more affordable housing, to Hollywood,” O’Farrell added. “I have always been mindful that sometimes the unintended consequence of new development is the displacement of existing tenants from their neighborhoods. This agreement ensures that the existing tenants have the opportunity to return at rents they would have expected in the neighborhood they are familiar with.”

If the planning commission’s decision is appealed, the project will next be considered by the Los Angeles City Council’s Planning and Land Use Management Committee and later the full City Council. Dates have not yet been scheduled.

“If Mayor Garcetti, or any L.A. City Council member or planning commissioner can get behind the Crossroads project as currently planned, they are blind to what’s actually going on with housing in Los Angeles today and should hang their heads in shame,” Kenslea said. “The 950-unit development claims to include 105 affordable units, but to get that number, the developer – with the city’s full faith and blessing – will demolish 82 existing rent-controlled apartments. So, the net gain is really only 23 new affordable apartments in a project that the city is also granting 22 liquor licenses to – in essence, one new bar or restaurant for every affordable apartment created. Not a bad deal for the Harridge Development Group, but devastating for the existing Hollywood community being displaced and destroyed.”