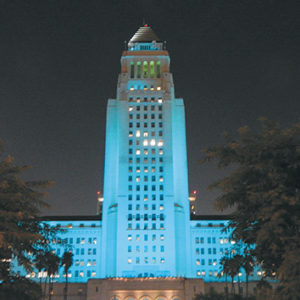 Emotional stories were shared about the loss of families and friends who had succumbed to cancer. Koretz decided to continue the awareness campaign by lighting the exterior of Los Angeles City Hall in teal to show support and create a conversation about ovarian cancer. The Ovarian Cancer Circle’s mission is to educate the public about the disease, highlighting the often missed symptoms and the importance of seeking health care.

In the United States, approximately 15,000 women die of ovarian cancer each year. Women who are diagnosed with ovarian cancer experience a 70 percent chance of recurrence. The disease can happen to women of any age and annual pap tests do not detect ovarian cancer. There is no early detection test for the disease other than a CA125 screening (which measures for the cancer antigen 125 protein), which is not always accurate. Women who are concerned that they might have symptoms should talk to their doctor about a transvaginal ultrasound exam.