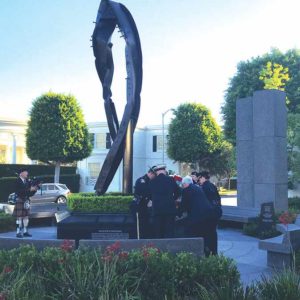 Beverly Hills city officials held a ceremony on Tuesday at the city’s 9/11 memorial garden, where a piece from one of the buildings in the World Trade Center is on display. (photo courtesy of the city of Beverly Hills)

Bells were rung to commemorate victims of the Sept. 11, 2001, terrorist attacks. The ceremony also included bagpipers and a helicopter flyover.

Additionally, Paris Mayor Anne Hidalgo attended the ceremony. She was in Los Angeles to meet with Garcetti prior to a climate change summit in San Francisco.

Near Wilshire Boulevard, the Miracle Mile Civic Coalition and First-In Fire Foundation placed a flag and notes of remembrance at a memorial stone in Hancock Park, near the La Brea Tar Pits and Museum. The memorial stone is located in a grove of trees planted in the park honoring victims including firefighters, police officers and passengers aboard American Airlines Flight 77, a plane that was hijacked during the attacks and crashed into the Pentagon. The plane was piloted by Charles Burlingame, brother of the late Miracle Mile resident and civic leader Brad Burlingame.

“May we never forget 9/11 and how we transform our deep sorrow into what is most touching and beautiful in the words ‘United We Stand,’” read a note placed at the memorial by Lyn MacEwen Cohen, Marc Cohen and Wally Marks, of the First-In Fire Foundation. “As we join resolutely our hearts and our hands in strength, in kindness, in love for one another and in love for our county, we quietly remember.”

In Beverly Hills, firefighters and police officers gathered for a bagpipe ceremony on Rexford Drive, near a piece of steel from the World Trade Center site that the city keeps on display. The artifact sits on a pentagon-shaped base in remembrance of the flight that crashed into the Pentagon in Arlington County, Virginia. 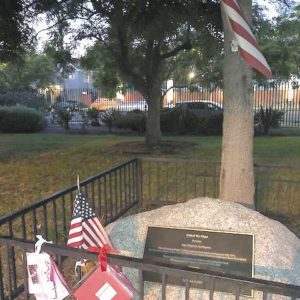 Flags and notes were placed at a 9/11 memorial in Hancock Park in the Miracle Mile. (photo courtesy of Lyn MacEwen Cohen)