‘BlacKkKlansman’ will easily take the Golden Globe for best comedy

When Spike Lee is on, he’s on. And “BlacKkKlansman” is a film not easily forgotten, powerfully told, pointedly relevant. It certainly discards subtlety by connecting a 1970s takedown of the clan in Colorado Springs to the current administration, but that’s OK. Films can be quite effective at screaming their points. 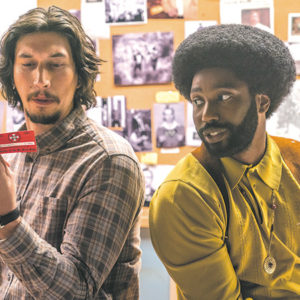 Adam Driver (left) stars as Flip Zimmerman and John David Washington as Ron Stallworth in Spike Lee’s “BlacKkKlansman,” a film about police infiltration of the Ku Klux Klan in Colorado Springs in the late 1970s. (photo by David Lee/Focus Features)

The most poignant moment occurs early when young Ron Stallworth (John David Washington), ready to prove himself as the first black officer of the Colorado Springs Police Department, is shocked by the notion of a grand wizard of the KKK bidding the robes and rituals farewell in favor of a political career that can subtly create racist policies.

While this is a film based on the true story of Stallworth’s unique undercover operation against a clan sect, it feels like an obvious nod to both our comb-over leader and one of his major supporters, David Duke, former grand wizard and current sentient stool. Expertly played by Topher Grace, young Davie, before he became a Louisiana representative, was just trying to live life separate from all those impure folks tarnishing American heritage.

He’s a smart dude too, another “stable genius” we all know so well. He can tell if someone doesn’t ethnically pass muster simply by the sound of his voice. Yet he and others in his little club are so easily fooled when Stallworth begins contacting them by phone, posing as a new recruit ready to take up the cause.

Problem No. 1, the rookie cop uses his real name, and he’s in the phone book. Problem No. 2, he now has to train a white officer to speak like him, to become the public face for undercover work. In real life, that officer’s identity is never revealed, he’s simply called Chuck. For this film, he’s Flip Zimmerman (the always incredible Adam Driver), a Jewish officer who has a stake in the investigation’s outcome.

“BlacKkKlansman” effectively balances comedy and drama, rarely reverting to cheap tricks or easy outs to address hard truths about racism in a city at large and a prejudicial police department. It almost seems to do so when one officer abuses his position. “We’re a family,” an officer says, as if that should allow a community’s supposed protector to go unpunished. Luckily, that’s not the case here. No hollow redemption (that obnoxious move in too many films that wipes the slate clean for a story’s primary oppressor), but the conclusion to this particular bit does feel a bit too clean, a touch of catharsis for an audience more prepared for an arthouse comedy than a social issue film. 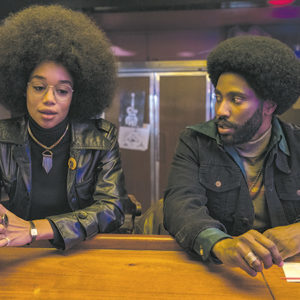 Laura Harrier as Patrice and Washington give compelling performances in “BlacKkKlansman,” which is based on a true story. (photo by David Lee/Focus Features)

But more occurs than a few laughs. Lee knows how to let the moment linger, embrace a long monologue once reserved for the stage. Our first foray into this occurs when Kwame Ture (Corey Hawkins) speaks to a predominantly black audience, mostly college students, about resisting oppression, possibly by arming for the onslaught to come. Hawkins’ brief appearance in the film is entrancing, an uncanny embodiment of an actual public figure so charismatic in front of a mic that American authorities monitored him for decades as a possible threat.

While the Oscar race is a crapshoot at this point, “BlacKkKlansman” is a clear frontrunner and all but a shoo-in to win the Golden Globes’ comedy-musical category, which is often characterized by slim pickings each year (screw “Mamma Mia! Here We Go Again”). Finally, something worthwhile can sweep.

That said, Boots Riley, director of “Sorry to Bother You,” another possible nom, chastised Lee for creating a film that alters some facts of the real case: rewriting a white detective as Jewish and making the police force seem more sympathetic to viewers. That second point is significant for Riley considering the current state of police forces and black communities nationwide. It’s a fascinating read that shouldn’t be easily discarded. The primary problem revolves around a biopic’s responsibility to historical accuracy and its function as a piece of art with a rhetorical point.

Beyond Riley’s criticism, the only other downside is a lack of stylistic originality, which early trailers for the film promised. “BlacKkKlansman” dabbles in surrealist moments and an occasional homage to blaxploitation films, but it remains conservative in its approach to the material. That’s a small criticism of a film that remains entertaining to the gut-wrenching conclusion, and one that should move those with a conscious to action.

Halloween culinary delights at the ‘happiest place on Earth’