Community residents, students and parents of Beverly Hills High School again voiced their concerns and oppositions regarding the Los Angeles County Metropolitan Transportation Authority’s Purple Line Extension and its planned construction under the public school during a forum on Monday, Sept. 24. 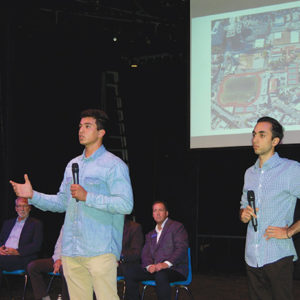 The Beverly Hills Unified School District has been locked in a yearslong legal battle against Metro and the Purple Line Extension’s route since 2012. In August 2016, a U.S. District Court judge required the Federal Transit Authority to perform additional environmental analysis for the subway’s route under Beverly Hills High School, but ultimately upheld the project. However, in January 2018, the school district filed another lawsuit, again claiming that the construction from the subway project “endangers the health and education of [the] students … [and] also puts at risk the high school’s historic buildings,” according to Lisa Korbatov, the district’s school board president. The case remains pending.

Seniors Ryan Abrishami, the high school’s student body president, and Sean Toobi, the student school board member, led Monday’s meeting at the high school, during which they largely disputed the numerous health studies and environmental reports conducted by Metro. They took issue with the noises and vibrations coming from the construction staging area, which Toobi said was just 15 feet from portable classrooms on the school’s campus, and with the supposed risk of cancer from the number of diesel-fueled trucks working around the area.

“Our primary concern is the health and the safety risk involved for everyone that steps foot on this campus,” Abrishami said.

Toobi and Abrishami both claimed the students’ and staff’s cancer risk, projected by Metro as increasing by roughly three times with the construction, was far greater, and said that the school district’s studies found that the risk increases by 10 times.

“This isn’t a matter of will it affect our health, or won’t it,” Abrishami said. “This is a matter of what degree the health of the students and the staff on this campus will be impacted.”

Metro spokesman Dave Sotero maintains that the studies Metro has conducted for the project have found that the cancer risks do not exceed the air quality management district threshold.

Additionally, the student leaders also claimed that potentially pressurized methane gas underneath the school threatened the project’s drilling and could lead to a blast, citing a 1985 incident during which underground gas leaked into a Ross Dress-For-Less Department Store in the Wilshire-Fairfax district and exploded, leaving over 20 people with burns.

Both, however, noted that they did not know where the gas was underneath the school or how much was even there.

The forum’s panel, which featured Dr. Marc B. Schenker, of the UC Davis Department of Public Health Sciences; Dr. Mathias Basner, of the University of Pennsylvania School of Medicine; and Dr. Edward Avol, of the Keck School of Medicine of USC, along with BHUSD Superintendent Michael Bregy and district counsel Terry Tao, echoed the students’ concerns.

“The idea is in preventive medicine, you reduce or eliminate exposures, not that you put them and try to deal with the health effects that occur from them,” Schenker said, adding that the Purple Line construction could lead to increased asthma, decreased learning performance and added stress for students. “We need to be protecting young people, not exposing them to risks and dealing with the consequences later on.”

The panel also emphasized they weren’t against the Purple Line Extension, just Metro’s current route for the subway.

“The problem is, where the portables are, [the students] can see it, they can hear it, and they can smell it what’s happening in that staging area,” Bregy said. “I can tell you there are multiple options available. There is a compromise here where the route doesn’t have to go through the heart of our one and only high school in Beverly Hills.”

In terms of other possible routes for the subway, Abrishami proposed that Metro go back to its original plan for the subway to follow Santa Monica Boulevard, rather than take a turn under the high school to travel to Century City. The current Metro route has been set since 2012 because fault lines were found along the boulevard.

Comments from parents of students and community members suggested the school district consider a second plan in the event the lawsuit, which is still pending, is rejected by the courts, as well as consider which government representatives could be contacted to put pressure on Metro.

Abrishami also called on the federal government to intervene and “stop the funding to Metro.”

In response, Sotero asserted that Metro’s studies are sound, and that the members of the Metro team have regularly met with the Beverly Hills students and the greater community to address any of their concerns. He added that there is “no feasible and prudent alternative alignment.”

Citizen is solid in Beverly Hills

They have an active oil derrick on their campus but yet a subway tunnel is what’s gonna cause health issues..

BHUSD is a joke

And they plan to dig under the school to build a parking structure!?!? You’re a joke BHUSD!! Build the subway and get over it

This is one of the most NIMBY arguments in the history of NIMBY arguments. You have an active oil derrick on campus and have some of the busiest streets choked with cars and you have the audacity to try and block a project that aims to REDUCE carbon emissions and pollution as well as reducing traffic congestion?!

Just think that your nannies and housekeepers won’t be riding the bus anymore to pamper you. They’ll be using the subway, a more efficient, cheaper, cleaner alternative to the thousands of cars on your streets everyday.

But that’s not what this is actually about. It’s about fear that the poors and undesirables will show up and ‘ruin’ your parents’ property values, thus devaluing yourselves in the eyes of your peers.

Huh? Sorry, time to carry your part of the burden of poor air quality even though it’s a tiny fraction of what our communities go through when you luxury goods ship in on diesel trucks.

This is a poor argument. Your high school is surrounded by traffic clogged streets. Have you measured the air quality during rush hour traffic?