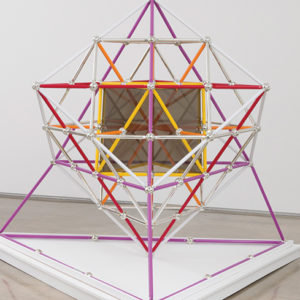 R. Buckminster Fuller’s creations, such as the “Duo Tet Star Polyhedra,” function not only as models of their mathematical and geometric properties, but also as works of art. (photo courtesy of Edward Cella Art & Architecture)

Organized 35 years after Fuller’s death, the exhibition represents an opportunity to reflect upon his comprehensive perspective on the world and humanity. The exhibition will be accompanied by two public programs collaboratively organized and presented with the Buckminster Fuller Institute.

The exhibition centers around the “Inventions” portfolio, a limited-edition print collection of Fuller’s key innovations including the 4D House, the Dymaxion Car and the Geodesic Dome, representing just a few of the more than thirty patents he holds.

Enter the world of Percy Jackson at the Getty Villa

Aviva to honor Kuehl for her support of families