Tricks of the trade

Eric Buss never cheats. That’s what the Burbank-based magician-comedian tells his audience whenever he sets up for his looping magic and music trick. His tabletop looper records the sounds he makes with his props and plays them back at regular intervals, creating a wacky, abstract song. Then, with the song playing in the background, Buss uses his props to do tricks in time to the song. He cracks his egg shaker, a percussion instrument that was making a rattling sound, against the side of a wine glass and a yolk comes out. He makes a glass bottle disappear in a paper bag, placing the bottle inside and then crumpling up the bag. He records the sound of a shuffling deck of cards into the looper, then makes a card disappear from his hand. 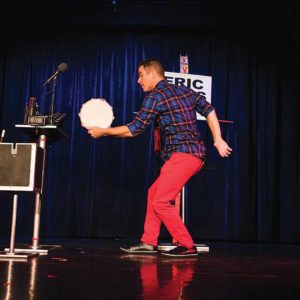 Buss performs onstage using a looper, which records sounds he å them back on repeat. (photo by taylor wong)

“I cannot let my guard down,” Buss said. “If you screw up looping something it reminds you of your screw-up every five seconds when you hear it again, and again, and again.” Still, it’s important to Buss to record those sounds live. When he first started doing the trick, he tried prerecording the track, but it didn’t look natural. Plus, that real-time challenge is what makes the trick fun for him onstage.

The stakes got higher for Buss this July when he was invited to perform at the Fédération Internationale des Sociétés Magiques World Championships of Magic in Busan, South Korea. Known among magicians as the “Olympics of Magic,” the championship happens every three years in cities around the world. After qualifying for FISM at a convention in Louisville, Kentucky, last summer, Buss asked the Academy of Magical Arts at the Magic Castle, where he has worked for 22 years, to support his participation. The Academy not only agreed, but the Magic Castle also hosted a joint performance for Buss and two other local FISM performers in the weeks leading up to their trip to Busan. This gave them an invaluable opportunity to practice the acts they’d be performing at arguably the world’s top magic competition.

But Buss said when he stepped off the plane in Busan, he started getting jittery.

“I always get nervous before a show,” Buss said, “but this was a different level.” Banners advertising FISM adorned the city, and when Buss arrived at the convention hall, seeing the long lines of attendees waiting to register reminded him that competing was a big deal.

It didn’t help that Buss was slated to perform on Friday, the last day of the competition. He watched other acts for four hours per day, four days straight, before taking the stage himself. That, he was told, was a good thing (rumor has it the organizers place the acts they’re most excited about on Friday so they’ll be seen by the most people and stay fresh in the judges’ minds). But it still made for a long week inside his head. Plus, some of the competition was stiff.

“The South Koreans are thinking on a different level, and most of what they’re doing looks like CGI live onstage,” Buss said. “It looks like real, true magic.”

He saw a magician produce two sheep out of thin air. In another act, the performer disassembled a Rubik’s Cube, then the pieces found their way back together on their own. A different magician sent a fireball in a circle around his body before turning it into a dove.

“You cannot go over there expecting to win,” Buss said. “You’ll just set yourself up for disappointment.” Instead, Buss relied on a simple, time-honored mantra: remember to have fun. Buss attended FISM with his wife, Ilysha Buss, marketing director at the Original Farmers Market at Third and Fairfax, and two of his longtime magician friends. All three of them were tasked with repeating this mantra to Buss.

“It sounds so elementary, and it sounds kind of dumb to need to be reminded of that,” Buss said. “But when I did hit the stage, I just went, you know what…if I’m having fun, [the audience] will have fun. If I start to stress out, [the audience] is not going to have fun. So I have literally one option here to make it go well.” 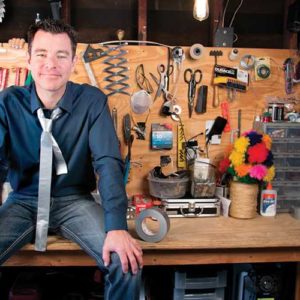 Buss in his workshop, where he makes many of the props for his shows. (photo by Jonathan Levit)

About two minutes into his act, Buss stopped repeating his mantra and started genuinely enjoying himself. He’d beefed up his normal looping act for FISM, adding flourishes in the few seconds here or there that seemed empty or lagging, and he didn’t need to cover up any missteps with the recording. He even added a few inside jokes specifically for the magic community.

One of those jokes was at his own expense, acknowledging that one of his tricks was fairly basic ¬– one a magician should, Buss admitted, be embarrassed to do at FISM. It’s a trick in which the magician pokes a needle through a balloon, but the balloon doesn’t pop.

“For FISM, I looped a lyric into the song that made a joke about me doing a needle-through-a-balloon trick at FISM,” Buss said. “The audience got it right away. If I’m making fun of myself, they can’t really make fun of me.”

Buss used the balloon because of the sounds it makes, which added a new, exciting layer to his looping song. And he left that trick in for FISM because he made a deal with himself that he would only go all the way to South Korea (on his own dime) if he was honing an act he could take back to the states and perform at his usual corporate events or on cruise ships.

Now that he’s back, those are the gigs he’s settled back into, but he looks forward to attending FISM again in the future. He mentioned hearing people in Busan say this was their 12th or 15th FISM, and he liked the way that sounded. In 2021, the event will be held in Quebec, the first FISM in North America.

“It’s a huge buzz in the magic world right now, and a lot of my friends are already registering,” Buss said. “I would love to go every three years for the rest of my life. It’s that big of a deal.”

In the meantime, it’s back to the grind, which, doesn’t feel like much of a grind to Buss.

“It doesn’t really feel like a job. Really, I’m in my garage, super-gluing a toy to a piece of metal. I just kind of laugh at my career sometimes, but it’s what I do.”

Curtain rising on the 2018-19 season at the Wallis

Back to our roots