When Melkon Khosrovian, co-owner of Greenbar Distillery, set out to make amaro, he considered where the bittersweet liqueur traditionally comes from: Italy.

“When we taste Italian amari, we’re tasting the things that grow in the Alps,” Khosrovian said. “Which is great, but we don’t live in the Alps.”

Khosrovian didn’t want to capture the taste of a faraway land; he wanted to bottle the spirit of California. So he went to Griffith Park to do some research. Greenbar’s Grand Poppy amaro, named for California’s state flower, is infused with ingredients that can be found in the park, like dandelion, lemon and, of course, California poppy. It is both spicy and smooth; when you sip it, its taste morphs several times, lingering before fading away. What could be more Los Angeles than a product that looks simple, but beneath its surface is stunningly complex?

When Greenbar opened its doors in 2004, it was the first distillery in Los Angeles since the repeal of Prohibition. Craft distilling was slow to catch on in L.A. Coming on the heels of the proliferation of craft breweries across the country, local distilling gained popularity in cities like Portland, Oregon before taking hold in Los Angeles.

Perhaps that can be explained by California’s sometimes arcane liquor laws, which Khosrovian has been active in fighting since he got into the distilling business. 2013 saw the passage of legislation that allowed small distilleries to open their doors to the public for tastings. This was well-timed – the American Craft Spirits Association reports that national retail sales of craft spirits grew by $2 billion between 2012 and 2017.

California now has more than 100 craft distilleries, many of which have enjoyed newly relaxed regulations as a result of the Craft Distillers Act of 2015. This allowed craft distilleries to sell a limited number of bottles directly to consumers, serve more liquor during tastings and mix cocktails. The legislation was an attempt to roll back Prohibition-era liquor laws and create parity among wineries, breweries and distilleries.

Like so many Californian pioneers before them, the three distillers we spoke to at the forefront of the movement aren’t adhering to centuries-old tradition; they’re innovators. They’re accidental distillers who never thought they’d get into the industry. And they’re also fiercely proud of their city – when these creators are dreaming up booze, Los Angeles is their muse.

The heart in Greenbar’s logo is a nod to Khosrovian opening Greenbar with his wife, Litty Mathew. The two began experimenting with vodka infusions when they were first engaged. Khosrovian is Armenian, and toasting with spirits was a big part of dinners with his extended family. The problem was that Mathew hated everything they were drinking.

“She would pick up the glass and put it right back down because to her it tasted like gasoline and nail polish remover,” Khosrovian said.

He and Mathew started shopping at local farmers markets for ingredients to infuse into vodka. The first winning combination? Pear, lavender and vanilla bean. They’d sneak their homemade infusions into the family dinners, trying to help Mathew’s preferences fly under the radar. But before long, Khosrovian’s cousins, and his cousin’s friends, and their friends’ friends, were calling, asking for bottles of their own. That’s when they opened Greenbar in Monrovia. From there, the business flourished, finally expanding to a converted warehouse in the downtown L.A. Arts District. 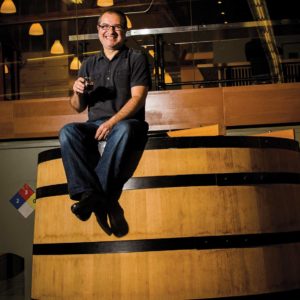 The fact that all their products are organic, like Khosrovian and Mathew’s discovery of distilling, was somewhat accidental. Once they started producing liquor on a larger scale, they were ordering their produce in bulk from local farmers. When those farmers started growing organic produce, they didn’t let Khosrovian and Mathew know. Instead, the couple noticed the flavor profiles of their liquors changing. When they went to investigate, they found that the organic produce was creating stronger flavors.

“That’s when the lightbulb went off,” Khosrovian said. “Organic stuff can help us make tastier liquor. That was the weirdest journey to organic.”

Although they didn’t set out to be, now Greenbar is an environmentally conscious operation. Khosrovian said that consuming one cocktail made with Greenbar spirits renders the drinker carbon-negative for the day. That’s because Greenbar has a relatively small carbon footprint already, thanks to their decision to use recycled materials in their bottles’ packaging and skip common industry practices like frosting their bottles or laminating their labels. But even that small carbon footprint is offset by the one tree Greenbar plants for every bottle sold. The positive environmental impact of each tree is so great that it negates the average drinker’s carbon footprint for the day, making Greenbar spirits some of the most “radically carbon-negative consumer products in the world,” Khosrovian said. Since they started planting trees in 2008, they’ve planted more than 700,000 from Belize to Panama.

In addition to sourcing their own backyard for organic produce, Khosrovian and Mathew looked to Los Angeles’ food scene for inspiration when they were creating their City Bright gin. Mathew is also an immigrant, born in Ethiopia to South Indian parents. The couple has a deep appreciation for the tapestry of culinary traditions that make this city unique. The gin is infused with flavors from cuisines popularized in Los Angeles by immigrant communities: mint from Middle Eastern cuisines, poblano peppers from Mexican food, star anise and basil from Vietnamese.

The ability to capture regional flavors, Khosrovian said, is the entire point of being a local craft distillery.

“Who cares about drinking something that a local company makes that’s exactly the same as everyone else?” he said.

Greenbar takes a different approach to whiskey, too. Whiskey is typically aged in white oak barrels, which influences its flavor. When Khosrovian and Mathew started making the spirit, they wanted to try aging it in a different kind of wood barrel.

“To our brains, wood started to feel like an ingredient instead of a container, and that allowed us to expand the flavor profile of whiskey,” Khosrovian said.

Since most barrel manufacturers don’t make them in any other varieties, they found that white oak was still the way to go for the barrel. But they also found that they could submerge wooden staves into the barrels and tweak the flavor just as effectively as replacing the barrels. Their Slow Hand Six Woods whiskey is flavored with the white oak from the barrel as well as staves of red oak, mulberry, hickory, grape and maple. After they’ve done their job, the staves are hung as decoration in the distillery, a reminder of the spirit’s complexity.

Over at The Spirit Guild, also in the downtown L.A. Arts District, founder Miller Duvall and head distiller Morgan McLachlan also set out to distill the magic of California into gin and vodka made from clementines grown on Duvall’s family farm. Most vodka and gin are made from grain, but The Spirit Guild actually ferments the citrus into the spirits’ bases.

Similar to Khosrovian and Mathew, Duvall said his entry into the distilling industry was somewhat spontaneous. He was spending a lot of time on his family’s farm, planting olive trees on the property to turn into olive oil, when he found himself feeling wistful every time he returned to Los Angeles. He literally wanted to bottle the feeling of being surrounded by California’s lush scenery, and that’s when he started to wonder if it was possible to turn clementines into liquor. Contrary to conventional distillery wisdom, it was. 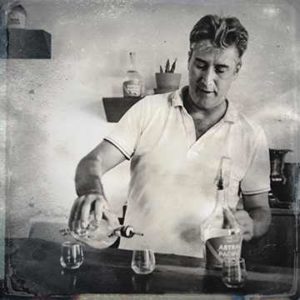 “It’s not like we were dying to start a distillery, it was just a serious hobby,” Duvall said. “There was an idea that we could go pro at some point, but it was the quality of what we had produced that made the decision for us.

It was important to Duvall to celebrate his family’s agricultural roots because, as a kid growing up in the Bay Area, he said he often saw farmland being paved over to make way for tech companies’ campuses.

“It was a very formative, visceral experience for me to see how agriculture can serve a community, and then what happens when it goes away,” he said.

Growing up in the Bay Area also instilled in Duvall a spirit of creativity.

Duvall said they did focus group testing to come up with the name for Astral Pacific gin, but McLachlan came up with Vapid vodka off the cuff. Rather than recycle Prohibition-era recipes, The Spirit Guild cooks up liquors that are bright and fresh rather than silky and dense.

“We’re not about grandpappy’s recipe here,” Duvall said. “California is a place where we innovate.”

The Spirit Guild isn’t the only distiller incorporating citrus into their product. In Pasadena, Greg Stark and Karen Robinson-Stark make a brandy entirely from oranges. Their Sunshine Orange brandy is a celebration of California as well, but it’s not oranges that hold family significance for the Starks. What does is their aquavit, a traditional Scandinavian liquor that was often featured at Stark’s family’s smorgasbords. When Aalborg, the go-to Danish brand, stopped being distributed in the states, Stark saw an opportunity.

Stark didn’t want to just copy the traditional recipe. He put his own spin on it, removing the dill and the star anise. Stark was used to D.I.Y. because prior to opening a distillery, Stark and Robinson-Stark had been brewing beer at home for years, but working day jobs as a software engineer and a grant manager, respectively. Robinson-Stark said their beer experience is probably why they’ve been successful at making spirits – their whiskey won a double gold medal in the 2017 American Distilling Institute competition and a silver medal in the 2017 San Francisco World Spirits Competition.

“Beer is the little brother of whiskey,” Robinson-Stark said. “Anyone who can demonstrably make good beer can probably make good whiskey.”

The Skyline gin was another story. It was Robinson-Stark’s baby, and she said she tried over 22 variations before she settled on the final recipe. Finally, she had to release it, and people who tried it said that even though they didn’t like gin, they liked this gin.

When she heard this, Robinson-Stark, remembering that she was an amateur distiller, panicked.

“I went, ‘Oh my God, what did I do wrong?’” she said. “But fortunately, people who really like gin also like my gin.”

Curtain rising on the 2018-19 season at the Wallis