Even though photographer Robert Landau was born and raised in Los Angeles, he sees the city as an outsider would. His father, an Austrian gallery owner with an affinity for the expressionists and a distaste for pop art, cast Landau’s own perspective into sharp relief when he was growing up near the Sunset Strip – and embracing its culture. 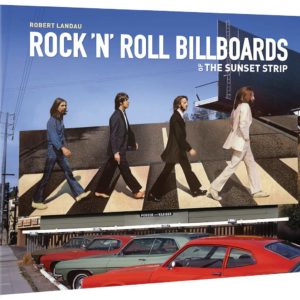 (photo by Robert Landau, used on the cover of his book)

“There’s an attachment and a detachment that lets you kind of look at [the city] and say, ‘What’s interesting about it?’” he said. “‘What makes it unique? What makes L.A. different than any other city in the world?’”

When Landau was a teenager in the 1970s, what he thought made L.A. unique were the hand-painted billboards advertising musicians lining the Sunset Strip. By that time, the Strip was more than a hotbed of Hollywood debauchery – it was also a hangout for Angelenos who identified with the counterculture movement, and Tower Records was their refuge.

Record companies took note, buying billboard advertising space to tout new albums by artists like The Doors, the Rolling Stones and Pink Floyd. Painted with care by skilled but unknown visual artists, they usually riffed on the artists’ album covers, standing tall above the Strip like stories-high murals.

Landau photographed these billboards, meticulously documenting them as they popped up, only to be taken down within weeks. Forty years later, in 2012, he published his extensive collection of billboard photographs in “Rock ‘n’ Roll Billboards of the Sunset Strip,” a glossy coffee-table tome that displays the photos alongside text delving into the history of the billboards’ creation. Now, he’s teaming up with Rugged Entertainment to produce “Sign O’ the Times,” a documentary that uses the billboards to explore the world of art, music and entertainment in Los Angeles during the ‘60s and ‘70s.

Tentatively set to release in 2019, the film will feature key players in the music industry like Robby Krieger, of The Doors; Jerry Moss, co-founder of A&M Records; and Jac Holzman, the Elektra Records founder who signed The Doors and is credited with coming up with the idea for the first rock ‘n’ roll billboard. The team has also spoken with some of the art directors, artists and other music industry insiders involved in the production of the artwork.

“People want to dismiss L.A. as this kind of superficial culture,” Landau said. “But I think if you scratch beneath the surface you see there is this interesting history. I think through these pictures, we can open up that whole period.” 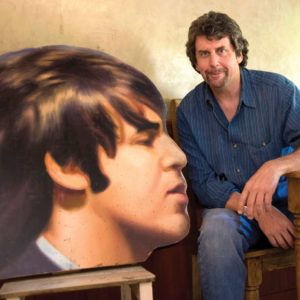 It’s a period, Landau said, that felt uniquely L.A. Growing up, Landau loved seeing the original signage and artwork that businesses on the Strip – not just record labels, but shops and restaurants – would put up to try to catch the attention of passing drivers.

“The Sunset Strip was this crazy hodgepodge of high and low mixed together,” he said. “Good architecture and bad architecture and little diners and fancy restaurants, and to me, that’s what L.A. was about: this mixture of things.”