A tap of the baton on the podium pierces the silence. Black-clad musicians lean forward in anticipation. The air tenses. And then – with a flick of the wrist – the music pours forth. It’s another magical evening with the Los Angeles Philharmonic, whose sounds have captivated audiences now for 100 years. In that century, the orchestra’s membership and repertoire may have changed, yet the LA Phil’s passion for its artistry remains a constant and prevailing note. 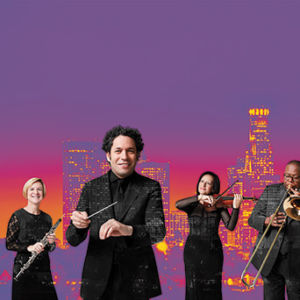 Conductor Gustavo Dudamel and members of the LA Phil celebrate the centennial season of the symphony in Los Angeles. (Photo courtesy of LA Phil)

“I have been thrilled to help define and shape the LA Phil over the past decade of our great history, when we have worked with such enthusiasm to make ourselves more diverse, more inclusive and more engaged with our community, while pushing ourselves every day to make music that is magnificent and courageous,” said LA Phil Music and Artistic Director Gustavo Dudamel. “This centennial season, which focuses so strongly on artistic breakthroughs and inspired educational projects, is going to carry us forward with new momentum.”

The 2018-19 season kicks off at the Walt Disney Concert Hall on Sept. 27 with “California Soul,” a concert and gala honoring the philharmonic’s home state and its pioneering artists, from the minimalistic composer John Adams to the prolific Frank Zappa. Led by Dudamel and directed by Elkhanah Pulitzer – of, yes, that Pulitzer family – the performance will feature Coldplay front man Chris Martin and singer Corinne Bailey Rae. Even the concert hall’s exterior will join the celebration with an installation by Refik Anadol projecting video, images and audio from the LA Phil’s archives onto the sweeping curves of the building.

The festivities don’t end there though. On Sept. 30, the LA Phil brings the music to the streets with a free eight-mile long party stretching from downtown’s Walt Disney Concert Hall to the Hollywood Bowl. In partnership with CicLAvia, the event will feature car-free streets open for people to walk, run, bike and more to the six performance hubs along the route – the Levitt Pavilion Los Angeles, Koreatown’s Liberty Park, Melrose Avenue at North Windsor Boulevard and Hollywood Avenue at Vine Street. The massive festival will host 1,800 musicians, artists and dancers on the streets, in addition to art installations, food trucks, family-friendly activities and more. And for the grand finale of the day – a free concert at the Hollywood Bowl led by Dudamel with popstar Katy Perry, R&B singer-songwriter Kali Uchis, jazz legend Herbie Hancock and the Youth Orchestra Los Angeles.

“The LA Phil has earned the reputation of being the orchestra that dares to do more, whether it’s for the diverse range of today’s composers or for the fast-changing communities that we work within and serve,” said Simon Woods, CEO of the LA Phil. “As I look ahead toward this centennial season, I feel that Gustavo and the artistic team have not just stood by the wager they’ve made on boldness and innovation, but have doubled down on it.” 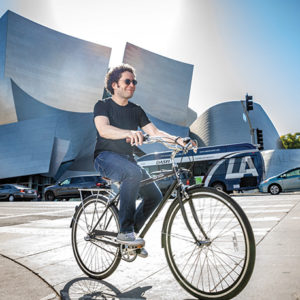 Take a ride with Dudamel in the eight-mile CicLAvia event on Sept. 30. (Photo courtesy of LA Phi)

The rest of the season includes plenty of big performances as well, with an emphasis on highlighting innovation. Starting in October and running throughout the centennial, the LA Phil will honor the experimental Fluxus movement of the 1960s and ‘70s, including with a performance by Yoko Ono. In November, the philharmonic will explore the relationship between movies and music, with screened selections of Stanley Kubrick’s “2001: A Space Odyssey,” “The Shining” and more, accompanied by live performances of the iconic scores. January 2019 will see the world premiere of famed composer Philip Glass’ new symphony, one of the 50 commissioned pieces for the LA Phil’s centennial.

Other season highlights include choreographer Benjamin Millepied’s collaboration with Dudamel in October for evocative performances of Sergei Prokofiev’s “Romeo and Juliet” by the American Ballet Theatre and the L.A. Dance Project, and the LA Phil’s celebration of Harlem Renaissance composer William Grant Still in February 2019.

And as the LA Phil wants to make clear – these festivities are for everyone. The philharmonic will distribute 10,000 free tickets throughout the season with the “100 for the 100th: Be Our Guest” program, offered through the Los Angeles County Board of Supervisors, with a focus on those who would be experiencing the philharmonic for the first time. The LA Phil will also take its talents across the globe starting in March 2019, with tour stops in Seoul, Tokyo, Edinburgh, London, Mexico City and New York City.

The season will conclude with one last hurrah on Oct. 24, 2019, a hundred years to the day when the LA Phil first debuted, with a grand gala featuring Dudamel sharing the Hollywood Bowl stage with orchestra giants Zubin Mehta and Esa-Pekka Salonen. As Woods believes, the event, along with the entire centennial, will honor not just the last century, but also build excitement for what the future holds.

“LA Phil 100 is indeed a celebration of everything that has led us to this moment,” Woods said. “But, more important, it is a new beginning for wonderful things to come for this great orchestra and those who are inspired by its music making.”

Crustacean: Cutting-edge Vietnamese cuisine in the heart of Beverly Hills