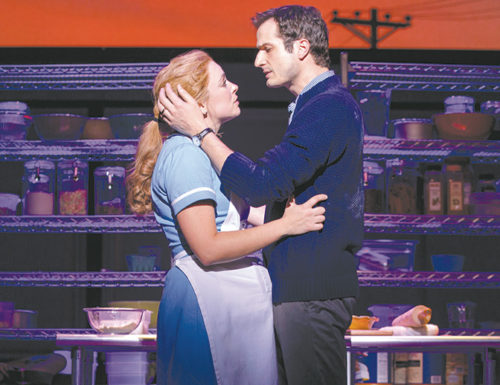 Bryan Fenkhart and Desi Oakley star in “Waitress,” a new musical with music by Sara Bareilles. (photo by Joan Marcus)

The musical is inspired by Adrienne Shelley’s 2007 film by the same name. It tells the story of Jenna, a waitress and expert pie maker who dreams of a way out of her small town and loveless marriage. A baking contest in a nearby county and the town’s new doctor may offer her a chance at a fresh start, while her fellow waitresses offer recipes for happiness. But Jenna must summon the strength and courage to rebuild her own life.

The cast includes Desi Oakley as Jenna, Lenne Klingaman as Dawn, Bryan Fenkhart as Dr. Pomatter, Nick Bailey as Earl and Ryan G. Dunkin as Cal. They will be joined by Broadway cast members Charity Angél Dawson as Becky, Larry Marshall as Old Joe and Jeremy Morse as Ogie.

The production features original music and lyrics by Bareilles, and is based on a book by screenwriter Jessie Nelson. Showtimes are 8 p.m., Tuesday through Friday; 2 and 8 p.m., Saturday; and 1 and 6:30 p.m., Sunday. Tickets start at $49.

The Hollywood Pantages Theatre is located at 6233 Hollywood Blvd. For information and tickets, call (800)982-2787, or visit hollywoodpantages.com/waitress.