Even before President Donald J. Trump was elected in 2016, his star on the Hollywood Walk of Fame has generated controversy as people on different sides of the political spectrum use it as a rallying point. 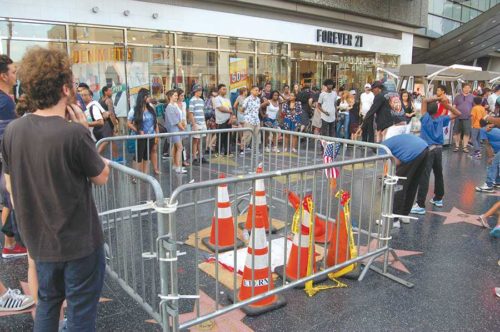 President Donald J. Trump’s star remained covered on Tuesday due to repairs that were made after it was vandalized last week. Fights also recently erupted on different days near the star. (photo by Edwin Folven)

The star, located at 6801 Hollywood Blvd. since 2007, has been vandalized with graffiti, broken and defaced. On July 25, a 24-year-old man used a pickax to reduce the star to rubble. The following day, a brawl erupted near the star between people with opposing political viewpoints. On July 29, another fight occurred under similar circumstances.

Austin Mikel Clay, who allegedly smashed the star with a pickax last week, turned himself into authorities the same day and has been charged with felony vandalism. It marked the second time in two years that a vandal significantly damaged the star.

As a result of the July 26 fight, a 19-year-old man was arrested and charged with robbery for allegedly snatching a camera from another man during the brawl. That defendant, Julio Gomez, was known to frequent the area in front of the Hollywood and Highland complex and was identified by officers, who were unable to immediately locate him. Gomez turned himself in on July 27 at the LAPD’s Hollywood Division. Officers broke up the fight on July 29 and no arrests were made.

Capt. Cory Palka, commanding officer of the Hollywood Division, said police are monitoring the situation around the star, which remained covered and protected by a barrier on Tuesday after repairs were made to the star. The Hollywood Historic Trust, an affiliate of the Hollywood Chamber of Commerce which oversees the Walk of Fame, repaired the star last week. It will take several days for the terrazzo surface to set before the barriers are taken down.

Some are calling for the star to be permanently removed. West Hollywood Councilman John D’Amico said a motion will be considered at that city’s council meeting on Monday asking the Los Angeles City Council and the Hollywood Chamber of Commerce to remove the star. D’Amico said Trump’s star, and others belonging to celebrities embroiled in controversy such as Bill Cosby, should not be part of a public attraction like the Walk of Fame.

“I think time’s up for giving stars to abusers. It’s important to think about the message we are sending,” D’Amico said. “It’s certainly a place that is a lightning rod. This is really an opportunity for the city of Los Angeles and the Hollywood Chamber of Commerce to step up.”

Hollywood Chamber of Commerce President and CEO Leron Gubler expressed disappointment about the recent problems at Trump’s star in a statement after it was vandalized last week. Representatives of the chamber declined to comment following the fights.

“The Hollywood Walk of Fame is an institution celebrating the positive contributions of the inductees,” Gubler’s statement read. “When people are unhappy with one of our honorees, we would hope that they would project their anger in more positive ways than to vandalize a California state landmark. Our democracy is based on respect for the law. People can make a difference by voting and not destroying public property.”

Councilman Mitch O’Farrell, 13th District, also denounced the vandalism. It is unclear whether calls for the star to be removed will be considered.

“I consider Donald J. Trump treasonous and his administration a criminal enterprise. However, that does not justify vandalism to the Walk of Fame, which is a national historic monument,” O’Farrell said. “Talk about the star’s removal is only a distraction to the task at hand: putting all of our energies into defeating his mean spirited, reckless agenda. I urge people to get involved politically so that someday, his star will only be considered a curiosity, representative of a con man that once served as president of the United States.”

On Tuesday, throngs of visitors walked by Trump’s star and gathered on the sidewalk to take photos and enjoy street performers nearby. Jeff Baker, who was visiting from Tennessee, said the he isn’t surprised Trump’s star is a polarizing feature on the Walk of Fame.

“Nowadays, everybody seems ready to fight,” Baker said. “It’s just one of those things.”

‘Mission: Impossible’ is still good a sixth time around