A 35-year-old transient remains in custody on felony assault charges after allegedly stabbing a male victim on July 31 in Pan Pacific Park. 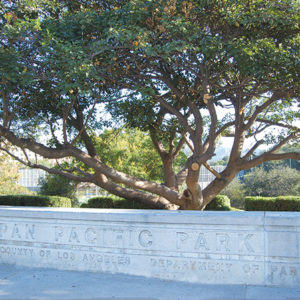 A transient was recently arrested for stabbing a male victim at Pan Pacific Park. The victim was treated and is recovering. Police plan to monitor transient activity at the park. (photo by Edwin Folven)

The suspect’s name was not released but he was described as a transient who frequents the park. Officers knew of the man and located him shortly after the late afternoon attack.

“It was unprovoked,” said Det. K. Mayer, with the Los Angeles Police Department’s Wilshire Division. “The victim was just using the park with some friends. The suspect is known as someone who is always drunk and belligerent in the park.”

Mayer said a knife was recovered. The victim was stabbed in the hands and torso. He was treated and is recovering.

Capt. Aaron McCraney, commanding officer of patrol for the Wilshire Division, said Pan Pacific Park is one of the many places officers routinely check for transients in an attempt to prevent problems. The stabbing is believed to be an anomaly, but officers will continue to monitor the area. Police in the Wilshire Division have a heightened awareness about crimes committed by transients in parks after problems experienced around an encampment formerly near Poinsettia Park.

“Pan Pacific Park has always been a location we are going to monitor and keep a close eye on,” McCraney said. “There are some concerns when we disperse transients from one location that they go somewhere else, so we are monitoring the whole division, and will continue to do so.”