Barney’s Beanery in West Hollywood and the buildings next door may be getting a tall and curvy new look. Phil Howard and Dean McKillen, owners of restaurants Laurel Hardware and Ysabel, Zach Vella of real estate company Vella Group and Barney’s Beanery owner David Houston want to develop 8445-8457 Santa Monica Blvd. into an eight-story, mixed-use building with hotel and apartment units, an entertainment venue, and retail shops and restaurants. 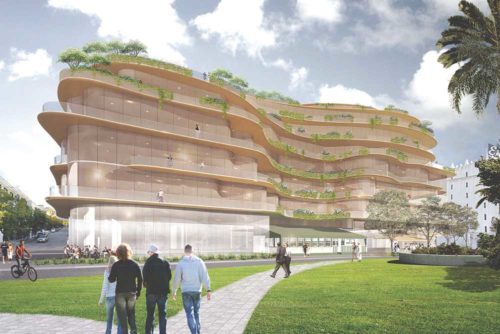 The proposal for 8445-8457 Santa Monica Blvd. is for an eight-story building with shops, three restaurants, residential units, hotel rooms, and a live music venue and recording studio. (photo courtesy of the Afriat Consulting Group, Inc.)

“This is a truly transformational project,” said project spokesperson Aaron Green, president of the Afriat Consulting Group, Inc. “We have purposefully designed this with an architectural and project program that pays homage to the cultural importance of the site while focusing on providing significant community benefits. We look forward to an engaged dialogue with our neighbors, which we believe will result in a project that we and the community will be equally excited to see built.”

In total, the project proposes a building with three restaurants, one of which will be Barney’s, on the ground level along with other shops; 45 residential units, including 11 below-market rate apartments; 88 hotel rooms; and an underground 80-seat live music venue and recording studio. On the southeast corner of the site, at the corner of Santa Monica Boulevard and Olive Drive, a plaza will be open for public use.

MAD Architects, who have designed the Lucas Museum of Narrative Art under construction in Los Angeles’ Exposition Park, are also designing this project, which incorporates organic, wavy shapes into the building.

“We wanted to create something beautiful and forward-thinking while still acknowledging the geographical and cultural importance of the site,” said Ma Yansong, founding principal of MAD Architects. “The building design is meant to complement the site’s location near the Santa Monica foothills by integrating curvilinear architectural elements and a landscape design that progresses from the ground floor, vertically along the building’s façades, and includes water features and expansive views.”

Spanning the block from Hacienda Place to Olive Drive, the new building will take the site of Niko Niko Sushi restaurant and incorporate elements of Barney’s Beanery, the gastropub famous for serving movie stars and musicians, from Jim Morrison to Quentin Tarantino. The eatery is also infamous for its history of homophobia, with a former owner once hanging a sign declaring “Fagots Stay Out.” The midcentury modern building sitting at the corner of Olive Drive and Santa Monica Boulevard will also be demolished for the project. Designed by Harry Harrison, the building once housed the Ritts Furniture Company and the Hollywood Stock Exchange.

The project was only recently proposed to the city, following a neighborhood meeting held on July 24 at the Palihouse in West Hollywood. Before any construction can begin, the city’s Planning Commission will review the proposal and conduct an environmental review with a consultant, which can take about a year or more, according to Jennifer Alkire, senior planner for West Hollywood. The Historic Preservation Commission and the Planning Commission will then provide their recommendations for the site before the City Council decides whether to approve the project.

The West Hollywood Preservation Alliance will also follow the project’s developments. In 2017, the group had hoped Harrison’s midcentury modern building would be designated historic, but the building did not “retain … sufficient integrity,” according to Victor Omelczenko, WHPA board president. Barney’s Beanery, however, could be deemed significant, which could affect how it is treated in the project.

“Barney’s Beanery is an excellent example of a remaining 1920s roadhouse tavern along West Hollywood’s portion of historic Route 66, and it appears eligible through the commercial survey for historic designation at both the state and local levels,” Omelczenko said.

Residents along Olive Drive have concerns with the proposed project as well. Richard Gordon, who has lived in an apartment on Olive Drive for over a decade, said he and at least nine of his neighbors in his building feel “overwhelmed” by the potential complex. Gordon was upset that the proposed eight-story building would block his three-story building, which currently overlooks the two-story midcentury modern building and offers sweeping views of the city and Los Angeles.

“We’ll be looking into a hotel room, and be 15 to 20 feet from their windows,” he said. “I have a lovely view and that’s the reason why I bought the apartment … Personally, I’m thinking of leaving West Hollywood after living here for 25 years.”

Gordon also noted that he had talked to other residents on Olive Drive, who felt similarly “appalled” about the development of a building with a hotel, shops, restaurants and an entertainment venue all on their small residential street, which only extends between Santa Monica and Sunset boulevards.

“We’re such a little street. It’s going to be outrageous,” Gordon said. “I don’t understand why they’re building it. They should move it five or 10 blocks from here.”

DWP customers in the dark about power outages