The Crack Shack takes fried chicken up a notch 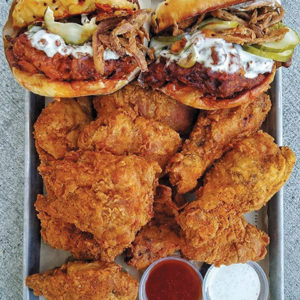 Created by celebrity chef Richard Blais, of “Top Chef” and fine-dining restaurant Juniper & Ivy, The Crack Shack has made quite a name for itself with its elevated food and drinks showcasing innovative California cuisine. The original shop, opened in 2015 in partnership with chef Jon Sloan and Michael Rosen, quickly grew such a flocking that Blais and his team opened other shacks in Encinitas and Costa Mesa. And now, at last, the eatery has hatched in Los Angeles at the Westfield Century City near Nordstrom.

While much of the new Los Angeles shack is cleanly designed with concrete, metal, wood and glass, accents of whimsical décor liven up the space. Upon entering the eatery, my husband, daughter and I were greeted by an enormous white rooster statue. A few steps in, and we spotted in the large bar area the glass and metal Moët & Chandon vending machine, filled with hundreds of chilled small bottles of imperial brut or imperial rosé. Posters featuring players from the Los Angeles Dodgers, Lakers and Galaxy with chicken heads hang along the walls. There’s even chicken wire above some of the booths. Blais’ James Beard-nominated cookbooks, such as “Try This at Home: Recipes From My Head to Your Plate,” also decorate the restaurant, available for guests to flip through or purchase.

Looking over the menu, we decided to order one or two items from each “Cocky” category to share family-style. The sandwiches feature humorous names such as the Double Clucker, Malibu Barbie Q and Coop Deville. My husband ordered the Señor Croque sandwich, which featured layers of crispy chicken, bacon, fried egg, melted cheddar and miso-maple butter all between a brioche roll. It’s thicker than most sandwiches, juicy and enhanced with “crack spice,” a proprietary blend of spices from Le Sanctuaire in San Francisco.

I decided to order the Downward Dog salad for something slightly healthier. The dish arrived with thick hummus below bite-sized grilled carrots and beets, sunflower seeds, quinoa and rocket arugula. It was delicious with a light lemon yogurt vinegar sprinkled on top. Other salads available include the Anti-Salad Power Bowl, Miso Healthy Bowl and the Baja Chop.

For sides, the “Other Cluck” section lists chicken oysters, Mexican poutine, deviled eggs, schmaltz fries and six mini biscuits. We tried the savory deviled eggs, which came on a tray with four halved eggs topped with the perfect sweet accent of candied “crack” bacon and a French toast crumble. We also enjoyed the fries and small biscuits served warm with a miso-maple butter spread.

For drinks, The Crack Shack offers milkshakes made from Salt & Straw ice cream. My husband and daughter ordered the chocolate and the honey lavender shakes, which were both richly flavored. I decided, however, to try the Champagne vending machine, receiving a token for $20 to retrieve a personal size Moët & Chandon bottle of the imperial rosé. There’s no drinking from the bottle here though – a server brought a flute for me to my table. The bubbles perfectly complemented the richness of our fried chicken, eggs and biscuits meal.

There are plenty of other boozy options as well. The bar has mixologists making craft cocktails and strawberry frosé slushies. Beer options include King Harbor, Beachwood and Mother Earth. Wines can be poured in two glass sizes or ordered by the bottle. The selection includes whites, rosé and reds.

The Crack Shack offers a happy hour every Monday through Friday from 3 to 7 p.m. Their specials deals will have you “crowing.”