Sun goes down on BOLD

Rodeo Drive was filled with art and music, local shops and restaurants kept their doors open later, and social media was abuzz with activity from Beverly Hills during the city’s second series of summer BOLD (Beverly Hills Open Later Days) events every weekend throughout August. 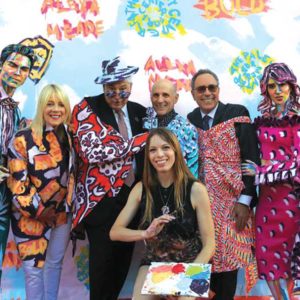 “There was so much enthusiasm,” Beverly Hills City Councilwoman Lili Bosse said. “The streets were filled of people with smiles on their faces.”

Bosse developed BOLD as a way to modernize the city’s nightlife and generate more customers for local businesses. With added competition from the neighboring Westfield Century City mall, the renovated Beverly Center, retailers in West Hollywood and elsewhere throughout L.A., the City Council had been looking to change the traditional early-evening closing times for Beverly Hills businesses. The council also wanted to address the concerns of the city’s hoteliers, some of whom said their guests typically leave Beverly Hills in the evening when they’re looking for things to do.

Last summer, a floating 3D art exhibit, fireworks and music kicked off a new era of shopping, dining and entertainment in Beverly Hills. Having completed its second year last weekend, Bosse said this year’s BOLD was “even bolder.” This summer’s BOLD programming included DJs every Friday night, live painting performances, food and drink carts, and an #OnlyOnRodeo photo booth on Rodeo Drive. In living art on Aug. 4 and 18, paintings by Alexa Meade were applied to models and a surrounding scene to create a 3D effect.

“Just by creating a mask of [shadow and] light with paint, it completely transformed the space,” Meade said in a statement.

There was also a Kids Dance Society on Aug. 11 in Beverly Canon Gardens; art walks on Aug. 10 and 17 through some of Beverly Hills’ galleries; and flash floral arrangements throughout different points of Rodeo Drive every Thursday.

“I was extremely thrilled and excited by it,” Bosse said of this summer’s BOLD, adding that it made the city “alive and vibrant.”

She said that the increased word-of-mouth throughout the community from the inaugural BOLD schedule last year helped lead to an even greater interest in this year’s lineup of events.

Long-term, council members have discussed a more modern shopping, dining and entertainment experience throughout the city on a regular basis.

Members of the Rodeo Drive Committee told the City Council earlier this year that many local businesses have been looking forward to BOLD’s return, after last year’s summer and holiday lineup of events. According to a city staff report, there were businesses last year that had increased sales and positive feedback from customers during BOLD events. A 5 percent increase in vehicle parking at the Two Rodeo Parking Garage on BOLD nights last year showed that the events helped increase the number of residents and visitors on the streets of Beverly Hills.

The city will begin planning this holiday season’s BOLD events, and plans will be announced in the coming weeks. Bosse said there will be some “new, exciting” things to look forward to.

Hollywood project back on target