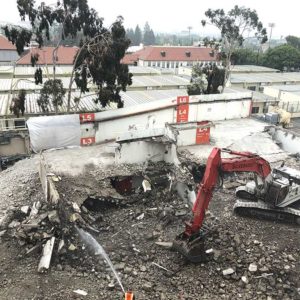 District property, at the top of the picture, is adjacent to Metro construction for the Purple Line Extension. (photo courtesy of Metro)

The Beverly Hills Unified School District has waged a yearslong legal battle against Metro with little to show. Beverly Hills High School seniors Sean Toobi, the new student school board member, and Ryan Abrishami told district personnel at an opening day event on Aug. 10 that they want to mobilize students against the tunnel alignment due to the environmental, health and safety concerns that district officials are worried about, but have so far proven insufficient in court to alter Metro’s plan.

“One thing I’ve always valued about our community is its heart,” Toobi said. “Whenever we see an issue we care about, that we feel will impact our students and staff, we take a stand. We fight. We saw that earlier this year with our high school students walking out to protest gun violence. And we see it today, with our teachers and staff sitting in the audience fighting for a cause they believe in.”

They said their goal is to get Metro to change the route. But, with another lawsuit from the school district pending in U.S. District Court, Metro plans to keep the tunnel alignment. The most significant development in the ongoing legal battle took place in August 2016, when U.S. District Court Judge George Wu upheld the Federal Transit Authority’s approval of the project, but also required the FTA to redo parts of the project’s environmental studies. Those updates were completed in 2017 and construction has continued as planned. The district’s Metro legal fees, funded through its $334 million Measure E construction bond, total approximately $12 million.

The city of Beverly Hills also has a pending lawsuit in federal court against Metro over the environmental impacts of the subway construction, but City Attorney Larry Wiener previously said the city is not seeking a change of the tunnel alignment.

“With really nothing significant achieved, many in our community seem to no longer care about what’s at stake,” Abrishami said, referring to the district’s legal challenge.

Among his claims, he said trucks going to and from the construction staging area each day will produce diesel emissions and dust “that will pose a risk of cancer 10 times greater than the appropriate level for students our age.”

“I listen to our students and support our students,” said Superintendent Michael Bregy, who allowed them to address staff about the issue, in response to whether he endorses that claim. “If a cancer risk is one-percent or higher, then the risk is too high for me as a superintendent of schools responsible for the safety of students.”

“Prior to the start of construction, Metro conducted a thorough, multi-year environmental review for the project that meets all state and federal environmental requirements,” the statement said. “We will not build an unsafe project that jeopardizes the health and welfare of the public. Our project will not exceed AQMD cancer risk thresholds.”

According to a cancer risk assessment for diesel particulate and nitrogen dioxide mentioned in the environmental impact report, the excess cancer risk did not exceed the South Coast Air Quality Management District’s threshold of 10 in one million, according to projections based on 225 school days per year and 12 hours per day of exposure over five years.

Noise, vibrations and other disruptions to classrooms have also been commonly cited reasons as to why the district opposes the tunnel alignment. In a video filmed on June 15, presented at the Board of Education’s June 19 meeting, Bregy and a small group that included school board members Lisa Korbatov and Howard Goldstein walked through a portable classroom on the perimeter of district property while Metro demolition work could be heard in the background. Bregy said he could feel the floor vibrating, and Goldstein compared a vibrating water bottle sitting on a desk to the water cup scene in “Jurassic Park.”

“This is not conducive to any learning environment at all, for any classroom, for any student anywhere,” Bregy said at the June school board meeting.

But he also said he knew beforehand that the demolition, which took place on properties owned and leased by Metro in Century City, had been scheduled to avert classes in session. In a statement posted on its blog, The Source, Metro said the demolition had been planned during the district’s summer recess, when the portable classrooms adjacent to the construction area were not in use. Through the first two days of classes this week, Bregy said he had not experienced or heard reports of any noise or vibration on school grounds.

“I think it’s unpredictable what that will be,” he said. “There have been no guarantees about what that vibration will be. I can only react to what’s there right now.”

Metro’s environmental impact report concluded that vibrations would fall within FTA standards, and Metro spokesman Dave Sotero said the agency is committed to working with the city and school district to mitigate the impacts of construction. But district officials continue to worry about the proximity to the high school and its students and staff.

“What other public schools has Metro tunneled under in the state of California?” Bregy said. “This would be helpful. I have asked this question for over a year without a response.”

The video also shows a wall that they alleged had been broken by Metro, leaving fallen debris on the district’s side of the construction border. Metro said its project staff reported that there was no evidence of demolition materials landing on school property.

Phase 2 of the Purple Line Extension will extend the rail 2.59 miles through the Miracle Mile and Beverly Hills into Century City. It’s scheduled to begin operation in 2025. The extension will continue into Westwood.

Even the youngins in BH are NIMBYs!