The Los Angeles County Sheriff’s Department recently destroyed 3,566 confiscated weapons that will be converted into steel rebar for use in highway and bridge construction projects in California, Nevada and Arizona. 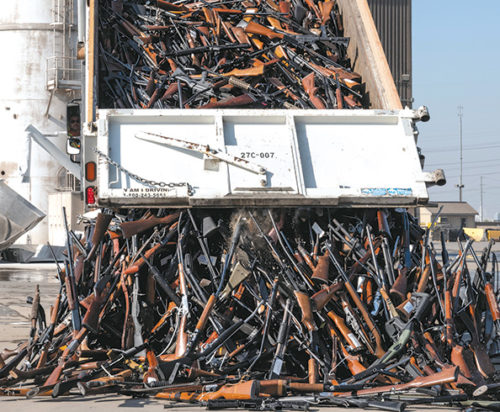 A truck dumped thousands of firearms at a facility that recently melted them down and converted the steel into rebar for road projects. (photo courtesy of the LASD)

The weapon destruction occurs every July in compliance with the California Penal Code, which calls for weapons unable to be sold to the public or returned to their owners to be destroyed. Thousands of pounds of metal were processed at 3,000 degrees Fahrenheit and remolded into materials for upgrading roads, highways and bridges. The weapons included guns confiscated in criminal investigations and probation seizures, as well as firearms surrendered by citizens.

For the past 25 years, Gerdau Steel Mill has donated its furnace, equipment and personnel to convert the weapons into steel rebar. The company’s cooperation in recycling the metal allows the department to comply with its annual duty under the penal code. The Los Angeles County Sheriff’s Department and Gerdau will have destroyed approximately 170,000 firearms over the past 25 years.

“Each illegal weapon removed from our streets significantly influences the community and citizens we serve,” Parra said. “I commend law enforcement officers all over Los Angeles County for their diligence and hard work. It is their efforts which act as an impactful deterrent against senseless acts of violence and save lives.”