The Los Angeles County Board of Supervisors has selected Ricardo Garcia to be the county’s new public defender. 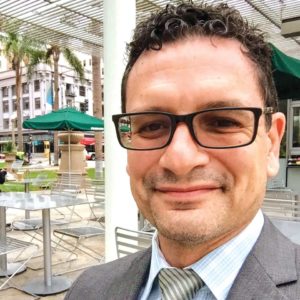 Garcia has dedicated his career to defending indigent clients who could otherwise afford no representation. He is currently a supervising attorney in San Diego County’s Office of the Public Defender, and is expected to begin his new role later this year.

Garcia joined the San Diego County Public Defender’s Office in 1995 as a trial attorney. In 1998, he was recruited to join the Department of the Alternative Public Defender, created to handle multiple-defendant conflict cases. From 2004-06, he served as the criminal justice director for the American Civil Liberties Union of Southern California, where he was responsible for monitoring the consent decree with the Los Angeles Police Department as well as conditions within the L.A. County jails. He returned to the San Diego Alternative Public Defender Department in 2006 as supervising attorney of its South Bay Office, before moving to his current post in 2009.

Beyond his skills in the courtroom, he is also an educator. In addition to serving as an adjunct professor of criminal procedure and motions practice at California Western School of Law, he is a faculty member at the Shechmeister Death Penalty College at Santa Clara University. He also lectures on litigating complex gang cases in the continuing legal education programs of the California Public Defenders Association. In addition, he teaches Spanish language trial skills to graduate student lawyers.

He was named Trial Lawyer of the Year by the San Diego Criminal Defense Bar Association in 2015, and awarded the Dale Melvin Ray Memorial Award for Excellence in the Representation of the Indigent by San Diego County’s Department of the Alternate Public Defender.

“After a thorough and exhaustive search, I look forward to having veteran trial attorney Ricardo Garcia serve as Los Angeles County’s new Public Defender,” Supervisor Mark Ridley-Thomas said. “I am confident that he will be a strong partner in carrying out the Board of Supervisors’ criminal justice reform agenda and making the Office of the Public Defender the best it has ever been.”

Imagine L.A. celebrates back to school