The Marías continue the Skirball’s 22nd season of Sunset Concerts on Thursday, Aug. 9, at 8 p.m. 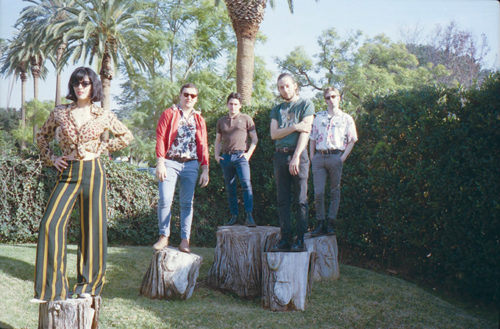 Fresh off performances at Coachella and the 10th annual International Kampoeng Jazz Festival in Indonesia, the Los Angeles-based outfit performs a bilingual fusion of jazz, psychedelia and funk that’s evocative of the sultry 1970s. The evening begins with DJ Hoseh of dublab, who will spin a set at 6:30 p.m.

The psychedelic-soul lovechild of Los Angeles native Josh Conway and the Puerto Rican-born and Atlanta-raised lead vocalist, María, The Marías formed in Los Angeles in 2016. Through their hypnotic guitar riffs, smoky vocals and nostalgic horn solos, they quickly generated buzz with a SoundCloud demo that gained airplay on KCRW and led to a debut performance at KCRW’s School Night.

The five-member band released its first EP, “Superclean Vol. I,” in the fall of 2017, which will be followed by “Superclean Vol. II” this year. This fall, they will be on tour with Mexican alternative-rock legends Café Tacvba.

The 2018 Sunset Concerts schedule continues with Ranky Tanky on Aug. 16 and Kishi Bashi on Aug. 23.