Construction of a Target store at Sunset Boulevard and Western Avenue may soon resume after the California State Court of Appeals ruled in favor of the city of Los Angeles and Target Corporation on Aug. 23 in an appeal to a lawsuit that halted work on the store four years ago. 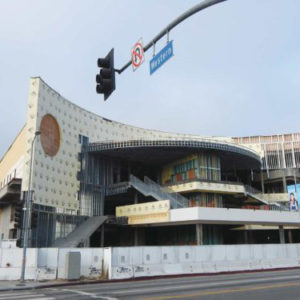 The Target store has remained incomplete at the corner of Sunset and Western for four years. (photo by Edwin Folven)

The appeal reverses a Los Angeles Superior Court ruling in favor of plaintiffs Citizens Coalition of Los Angeles and the La Mirada Avenue Neighborhood Association. The plaintiffs wanted an environmental impact study to be conducted for the project.

The Los Angeles City Council originally approved the Target project in 2012, and the plaintiffs filed a lawsuit over changes to zoning that previously limited buildings at the site to 35 feet. In 2014, Los Angeles Superior Court Judge Richard Fruin ruled in favor of the plaintiffs, determining the city had illegally changed zoning rules to allow for the three-story Target store.

In 2016, the City Council approved further zoning changes at the Target site, allowing a 74-foot-tall building. The plaintiffs filed a new lawsuit and Fruin again halted construction, ruling that impacts to the community needed to be studied further. The city and Target had filed an appeal, which resulted in the ruling on Aug. 23.

“When I took office in 2013, the Target project was already approved and under construction,” said Councilman Mitch O’Farrell, 13th District. “Through council action, my staff and I worked with city departments to address the deficiencies cited by a judge related to the lawsuit that brought construction to a halt. The appellate court ruling is not only a win for the city, but a victory for the communities I represent. Local residents will soon have visual relief from the blight associated with the partially built store, and a brand new neighborhood-serving amenity that will provide hundreds of local jobs for the community. With this path forward, we can complete the project and bring this long, unfortunate saga to a close.”

“We’re very pleased with the outcome of the latest legal proceedings in our pursuit to build a Target store in Hollywood on Sunset Boulevard,” a statement from Target Corporation read. “This development brings us one step closer to offering an easy and inspiring shopping experience to this area. We appreciate the city’s continued support for Target in our ongoing efforts, and we thank the community for its patience as we work toward resuming construction.”

A timeline for resuming construction was not announced.

Doug Haines, a member of the La Mirada Avenue Neighborhood Association, said the plaintiffs plan to ask the California Supreme Court to consider the appellate court’s decision. He added that if the ruling is upheld, it would set a precedent for allowing spot-zoning changes for other large projects throughout the state.

“I believe Judge Fruin’s initial decision had merit. Instead of changing the project to accord with the law, they changed the law to accord with the project,” Haines said. “We believe it will be appropriate for this to be reviewed by the California Supreme Court, and we look forward to having that opportunity.”

Enjoy a night of Shakespeare and Tchaikovsky at the Hollywood Bowl