Police are looking for a female transient who allegedly stabbed a resident in the Melrose District on June 30. 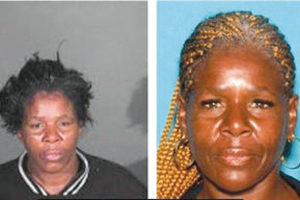 Photographs of Vicky McCoy have been released. She is wanted in connection with a stabbing that occurred on Waring Avenue in June. (photo courtesy of the LAPD)

The stabbing happened at approximately 5 p.m. after an unidentified female resident realized the suspect was inside a vacant house in the 7300 block of Waring Avenue. The victim confronted the intruder, and the suspect pulled out a steak knife and stabbed her in the torso.

Det. K Mayer, with the LAPD’s Wilshire Division, said the suspect fled before police arrived. The victim was transported to a hospital and treated for a non-life-threatening wound.

The vacant residence, which did not belong to the victim, is located on Waring Avenue near Poinsettia Place, where a homeless encampment was located for months until the area was recently cleared. Police and social services providers found housing and resources for many of the people staying there. Some were arrested and others moved to different locations.

“She hasn’t been seen for some time,” Mayer added. “We didn’t know who she was until investigators did a whole lot of work. The detectives ID’d her through the investigation.”

Mayer cautioned people to call 911 and not approach or confront transients or others they see committing crimes.

“You don’t know if they are armed or what their mental state is,” Mayer added.

Partnership will bring more of Broadway to Hollywood