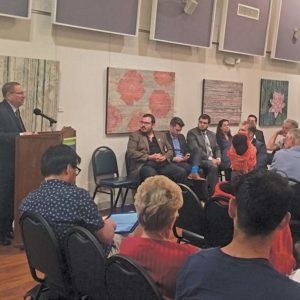 “The number of homeless has gone down a tiny, tiny bit for the first time in several years, [which] I find not encouraging in one way, and encouraging in another,” Koretz said. “The more chronic homeless number has gone down around 15 or 20 percent, which is exciting and it gives me more confidence that we can solve this problem … [However,] new homeless almost offset the entire gains for the year, so we clearly need to be more aggressive in addressing what’s causing new homeless.”

The Los Angeles Homeless Services Authority reported an increase from last year’s 8,044 newly homeless individuals in Los Angeles County to 9,322 in the 2018 homeless count. At the neighborhood council meeting, Koretz largely attributed that increase to the 1995 Costa-Hawkins Rental Housing Act, which limits rent control in California and allows for what the councilman deemed “inappropriate” evictions by landlords.

“We have had absurd cases where we’ve had people that have been given eviction notices because their goldfish violated their no-pets lease,” the councilman said. “People are clearly looking for whatever possible stretch or excuse to evict someone because under the Costa-Hawkins law … once someone vacates a unit, they pay $800, and then the next person might pay $4,000 under the current rent market that we’re in. So there are almost no affordable units in the market.”

Koretz also shared his struggles in finding available properties to shelter homeless individuals, or what he called “bridge to home sites,” despite his “aggressive” search for suitable buildings. In March 2018, all 15 Los Angeles council members pledged to support at least 222 units of housing for homeless people in their districts before July 2020.

“Every developer wants to build on every possible property in my district if they can. I asked the city to look at schools that have closed down for a couple years – there’s one that you probably all know of on Beverly Boulevard just west of Fairfax,” Koretz said. “By the time that we went through a month or so of the process to look at it, someone had already bought it out from us from the owner. That’s been my typical experience.”

Koretz said he has also been researching other approaches, including the collaborative housing made available through the nonprofit SHARE! The program provides housing to disabled individuals in single-family residences across Los Angeles County. It requires residents to pay rent to homeowners from their disability checks or other income, while homeowners are responsible for furnishing the house and paying the utilities.

As the councilman told the board members and residents, he hopes to try the SHARE! housing program through pilots in his district, claiming that the process “works better than anything else [he’s] aware of” and would additionally be a cheaper option for housing individuals, costing around $150,000 for 100 people. The bridge to home sites, Koretz estimated, would cost anywhere between $1-3 million to house the same number of people.

“I look around Mid City West and I see underutilized sites everywhere – fast-food locations, gas stations, empty one-story storefronts,” Mid City West board Chair Scott Epstein said. “It seems to me that the opportunities are actually pretty broad in our community. I’m just hoping to see a more proactive approach.”

“It seems a lot of the work is convincing private landowners to do something that they may or may not want to do,” Jhun said.

Koretz said that he had only just begun to consider eminent domain as a possibility, especially in regards to a property that used to be a historic Christian-Science Church in Westwood.

The evening also featured a lengthy explanation by Koretz on why he moved away from his initial position of supporting dockless electric scooters from companies like Bird and Lime.

“I remember when I first realized that they were a significant phenomenon, I was having a meal at Vegan Glory near Orlando and Beverly with my wife and daughter, and I was looking out the window, and I was like, ‘Oh my god. These have gone crazy. Look, there’s a whole family on Birds,’ Koretz said. “That was when I looked around and realized that every block had a bunch of scooters and a lot of them were in use and they violated just about every law that you could have … Nobody is wearing helmets, in violation of state law … Everyone is on the sidewalk, illegal under state law.”

The councilman cited safety as one of his main concerns, sharing that he heard of people being knocked down by riders on the sidewalk and that he even had to dive away from two riders speeding down the right of way.

“I don’t think there is a legal path to following state law … If it could work as a first mile, last mile type of use and it could be done safely, then it would have some value, but I think most rides are done by the inexperienced riders, underaged riders who don’t have helmets, on sidewalks that weren’t meant for scooters, and I think we’re concerned that this will be a safety hazard,” Koretz added. “I’m really not a fan, and I’m hoping we will slow this down and dial it back. That’s my opinion.”

While most Mid City West board members chose not to comment on the topic, a few pushed against Koretz for taking such a hard stance against the scooters. David Mann said the scooters were helpful for addressing first and last mile transit issues, which refer to the distances public transit riders must complete on their own by walking, biking or driving to arrive to their first bus or rail stop and then their destination after exiting bus and rail services.

“The fact that it’s such a big issue and so contentious – I think it should remain in play and on the board,” Mann said. “I think it will come down to individual responsibility. A lot of the pushback is because they’re just tossed all over the place.”

Abraham Langer said he wanted Koretz to be more “constructive” in his approach, considering that there are people using the scooters responsibly. He added that he wanted to avoid “destroying the opportunity for innovation.”

Back to school bells ring throughout L.A.