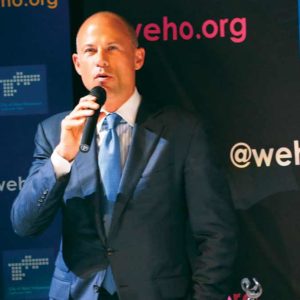 Avenatti told the audience at the Center for Early Education that he’s representing the three additional women, but can’t reveal their identities yet. As of Wednesday, he didn’t reveal any more information.

“We’re in the process of getting clearance from those clients to release details related to those statements and the efforts to silence those women,” he said, but added that “at least one of those women claimed to be pregnant at the time.”

The event was held at the Center for Early Education with Avenatti, Pasadena City Councilman Steve Madison and Mariana Magana Gamero of the Coalition for Humane Immigrant Rights of Los Angeles as panelists. West Hollywood Mayor John Duran was the moderator.

Avenatti and Daniels were in West Hollywood in May, when the city held a Stormy Daniels Day ceremony. Some residents were supportive of their role in “the resistance,” but several others felt that Daniels’ sordid history with the president wasn’t worthy of the honor.

Topics covered in last week’s panel discussion included the revelation that former Trump attorney Michael Cohen had been recording conversations between himself and the president. The New York Times reported on July 20 that one of those recordings was a conversation between Trump and Cohen over a hush payment to a former Playboy model that Trump had made to her to conceal an affair she claims they had. The Trump administration has denied having any knowledge of the payments. It’s not yet clear if this or other recordings will pose legal complications for the president.

“I think the amount of evidence that Michael Cohen is going to ultimately be able to provide to prosecutors in an effort to save his own butt is basically going to bury this president,” Avenatti said. “That’s what I predict.”

The nation is also awaiting results of special counsel Robert Mueller’s investigation into Russian interference in the 2016 election, and whether they will have implications for Trump’s presidency.

“There is a lot going on in that Mueller investigation that we have no visibility to,” said Madison, who spent nine years as an assistant U.S. attorney.

He mentioned Steve Bannon, a former Trump advisor, and others close to the president who have been called in for interviews.

The federal government has also been working to reunite children and parents who had been separated after illegally crossing the border into the U.S. Last week, the Trump administration announced that more than 1,400 children had been reunited with their families or close friends who could care for them, but nearly 1,000 children were still in government custody for reasons including their parents had already been deported, according to media reports.

“There is no set detailed, outlined, strategic plan as to how our kids will be reunited with their families,” Gamero said. “And that is the work that all these organizations, not just CHIRLA, but many [organizations] throughout the state and throughout the country have taken on.”

Audience members submitted questions toward the end of the discussion.

“We’ve become two tribes in this nation,” Duran said, recounting a question from a friend. “It feels like two tribes, you’re either with Trump or you’re against him and you’ve got to pick a tribe, pick a team.

“What do we do as a country after we watch the shredding of our institutions, our courts, our intelligence agencies, Department of Justice? How do we even start to fix everything?”

Avenatti said the U.S. has long been viewed as “a stable force in the world that could always be counted on by our allies in the event that something went terribly wrong and they needed us.”