Plans by the Los Angeles County Metropolitan Transportation Authority to use a gate on Detroit Street for truck traffic at a Purple Line Extension subway project staging area has angered nearby residents and Councilman David Ryu, 4th District, who is calling on Metro to reconsider using the gate. 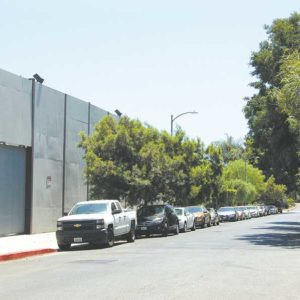 Metro plans to start using a gate on Detroit Street at a Purple Line Extension construction staging yard as an exit for cement trucks next month. (photo by Edwin Folven)

Ryu sent a letter to Metro dated June 11 expressing his disapproval of trucks using the Detroit Street gate, which is located on a residential street south of Wilshire Boulevard, directly across from the Miracle Mile Post Office. He cited noise, dust, parking and traffic issues that may arise.

Beginning in mid-September, Metro is planning to allow cement trucks to exit through the gate five to six times a day, according to spokesman Jose Ubaldo. The gate will only remain open for approximately five minutes at a time, he said. Use of the gate is necessary because other trucks removing soil from tunneling will be coming and going through the La Brea Avenue gates on the east side of the staging area.

“The cement (grout) will be used to fill in any voids between the tunnel segments and the soil,” Ubaldo said. “Metro commits to make every effort to limit exiting to daytime and early evening hours. However, in order to maintain tunneling operations, deliveries may be needed outside of that time frame.”

Representatives of the Miracle Mile Residential Association were incensed when they heard about Metro’s plans to use the gate. MMRA Vice President Ken Hixon said there was an unwritten agreement made years ago with Metro officials during preliminary discussions prior to construction beginning that the gate would only be used for emergencies and by supervisors in vehicles such as pick-ups. Another point of contention is that Metro did not respond to Ryu’s letter.

“As I told Metro in a letter on June 11, I do not support using the Detroit gate for the daily trucking of grout related to Purple Line construction. It’s clear that Metro has decided instead to ignore the concerns of the community and my office,” Ryu said. “Use of the Detroit gate is unnecessary while trucks can continue to use the La Brea gate. This community has put up with a lot from Metro during the Purple Line construction, and has been more than accommodating. Yet Metro has declined to respond to my June 11th letter or the community’s concerns around noise, dust and traffic problems that daily use of the Detroit gate would create. It seems they’ve put their convenience over the needs of the community. I urge them to reconsider.”

Ubaldo acknowledged that Metro had not responded. He said because the gate wouldn’t be in use until mid-September, Metro was conducting testing to determine exactly how the gate would be used. Trucks will exit and turn north on Detroit to Wilshire Boulevard and will not travel south into the adjoining neighborhood, he said.

“We fully anticipate responding to Councilman Ryu’s letter, however, we wanted an opportunity to conduct additional due diligence in order to provide him with accurate information,” Ubaldo responded. “Use of the gate and the related grouting operation is not scheduled to begin until mid-September.”

Ubaldo further said there was never an agreement not to use the Detroit Street gate for deliveries.

“Metro makes every effort to work with community members and mitigate construction impacts, however, we are not aware of any commitment to exclusively use the Detroit gate for emergencies and/or small vehicles,” Ubaldo said. “As construction proceeds on the project, there are periodic changes to circulation into and out of our construction sites and our contractor needs flexibility in order to minimize construction impacts and build the project in a timely and efficient manner.”

Ubaldo added that Metro informed the MMRA and members of Ryu’s staff in April about using the gate, and it was also mentioned at community meetings on construction in April and July. Hixon acknowledged that Metro had informed the community about use of the gate in April but challenged the assertion that there was no agreement that it would only be used for emergencies and small vehicles. He said the agreement was made during numerous previous meetings with Metro staff prior to construction beginning.

“We were very wary of the gate on Detroit but they reassured us over and over it wouldn’t be used for construction purposes,” Hixon said. “Now, they are saying, ‘we never promised you.’ We should have asked for a memo of understanding outlining all aspects. Given how they ignored Ryu, now we are feeling like they can renege on anything they have promised. In the meantime, we are a community that has to live with two subway sites in our neighborhood. It puts us in the position of, ‘why would we make that up?’”

Ubaldo also responded to the MMRA’s assertions that they were misled about the gate.

“With any large, highly complex construction project, it’s easy to see how information may get lost in the shuffle and we do our best to avoid misunderstandings or miscommunication,” Ubaldo said. “In this case, we communicated about the use of the gate in a meeting with members of the Miracle Mile Residents Association and Councilman Ryu’s office, we presented this information at a couple of community meetings and sent an email directly to a MMRA representative (Hixon).”

Ubaldo said there will be further meetings with the community about the project, and Metro representatives will communicate with them discussions Metro staff had with the city of Los Angeles regarding the gate.

“We are going to be in contact with the community all the way. It’s really important for us to keep that relationship working,” Ubaldo said. “We are trying to accommodate as much as possible. We are there for the long haul.”