Investigators arrested a 54-year-old man who allegedly committed 21 burglaries in Koreatown from February 2017 through Aug. 16, when he was taken into custody. 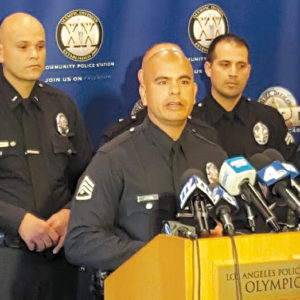 Det. Michael Lorenz discussed the burglaries and the arrest of a suspect in Koreatown. (photo courtesy of the LAPD)

Det. Michael Lorenz, with the LAPD’s Olympic Division, said police conducted a special operation on Aug. 16 to search for the defendant in the neighborhood between Third and Sixth streets, and Harvard Boulevard and Catalina Street. Detectives knew the suspect committed burglaries in that area during business hours on weekdays.

On Aug. 16, officers saw a man matching the suspect’s description near Fourth and Catalina streets. Marcelino Perez was stopped, interviewed and arrested, and later charged with 21 felony counts for burglary. He was carrying a screwdriver and was likely on his way to commit a burglary when arrested, Lorenz said.

“We did an analysis of what he was doing, what times, what locations and where,” Lorenz added. “The burglaries occurred within the same geographic area, all on weekdays during normal business hours. We took a look a different patterns, and were able to make a determination.”

The suspect pried open doors to gain entry to apartments, and stole cash and jewelry. No injuries were reported. During one break-in, an occupant was present and the suspect fled, Lorenz said. No one was present during the other burglaries.

Police were unable to locate an address for Perez and believe he was likely a transient staying in the Koreatown area. Investigators are checking with other LAPD divisions and law enforcement agencies, but have not connected Perez to any other crimes.

Perez pleaded not guilty to the burglary charges and is being held on more than $1 million bail. He is scheduled to return to court today for a preliminary hearing.

‘To All the Boys I’ve Loved Before’ is reminiscent of ‘80s teen films, without the racism