Man arrested after barricading himself in condo

Sheriff’s deputies arrested a 57-year-old man who barricaded himself inside a condominium at 999 N. Doheny Drive on Aug. 21 in what police described as a landlord-tenant dispute. 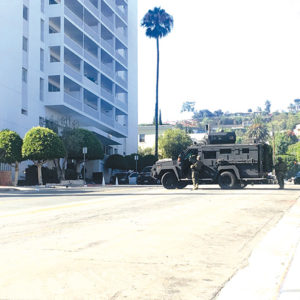 The sheriff’s department’s Special Enforcement Bureau was called to a condominium building in West Hollywood on Tuesday following a landlord-tenant dispute. A resident involved was arrested after a five-and-a-half-hour standoff. (photo courtesy of the LASD)

Deputies went to the building around noon to investigate a report of a dispute between the building owner and tenant Cyrus Chady. When they went to Chady’s condominium, deputies reported hearing gunshots and retreated.

The sheriff’s department’s Crisis Negotiation Team and Special Enforcement Bureau, which is the department’s SWAT team, was summoned. Chady threw numerous household items out a window and off a second-floor balcony on to a driveway below, including small boxes, a folding chair, suitcase, broom and trash. He also barricaded himself inside the condo. After five and a half hours of attempting to persuade the man to surrender, deputies deployed tear gas, forced their way inside and took Chady into custody.

Sgt. Jeff Bishop, with the West Hollywood Sheriff’s Station, said no gun was found inside the condo.

“We were unable to determine if there were any gunshots,” he said.

Bishop did not know how long Chady had lived there, but said deputies had been at the condo multiple times on disturbance calls. Chady faces charges of making criminal threats, he added.