Campaigning to unseat U.S. Sen. Dianne Feinstein in this November’s Senate race, state Sen. Kevin de Leon has traveled throughout California in a “corner to corner” tour making his case to voters. 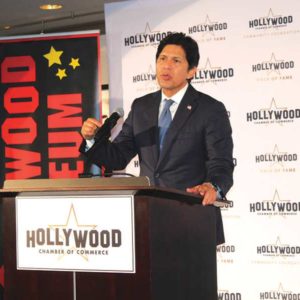 He returned home for one of his latest stops, at Paramount Studios on Aug. 17, to deliver a state of the state address in front of the Hollywood Chamber of Commerce that covered his candidacy, California’s role in “the resistance” against President Trump and how to alleviate the homeless crisis.

“It’s been a whirlwind going up and down the state of California,” de Leon (D-Los Angeles) said. “But for me, coming back home here in the city of Los Angeles, here in Hollywood, makes me always feel good.”

A San Diego native, de Leon has an uphill climb against Feinstein, who has held the seat since 1992. Her average lead in the polls is approximately 20 percentage points, according to RealClearPolitics.

“They say Washington, D.C., is Hollywood for ugly people. So if I don’t make it across the finish line this November, you know why,” de Leon quipped.

The state senator has been telling voters about his mother, who arrived in the U.S. with a third-grade education from Mexico, where she lived in a house with a dirt floor and no indoor plumbing. California, he said, made it possible for a woman with her modest beginnings to have a son ascend to the state Legislature.

The state’s economy, the fifth largest in the world, has been propelled in part by a growing number of jobs in renewable energy. De Leon’s campaign calls for a Green New Deal to continue that trend.

“We have been successful because California is not afraid to try new things,” he said. “We’re not afraid to do anything within our power to propel our state headlong into the future.”

But with the state’s urban areas beleaguered by homelessness and stagnant wages for many poor and working class families, de Leon acknowledged that the state’s economy “is not working for everyone.”

“This economy is leaving many folks behind,” he said. “And that opportunity gap is increasing even more so.”

On homelessness, he called Los Angeles a “national embarrassment.” The annual homeless count showed a slight decrease this year, but there are still an estimated 53,195 homeless individuals in L.A. County, including 31,516 in the city of Los Angeles.

“Homelessness in our great state is not a political issue,” de Leon said. “It’s a humanitarian issue. It impacts our neighbors, our families, our friends, our businesses, regardless of who they are and where they come from.”

A bill authored by de Leon, the No Place Like Home Act of 2018, will be put to a vote this November. If approved, it would authorize up to $2 billion in existing funding for permanent supportive housing for homeless individuals affected by mental illness.

A prominent progressive voice against the Trump administration, de Leon said California’s stances on climate change and trade should continue to align with the rest of the world.

“In California, we must be focused in our resistance,” he said. “Resistance with results, resistance that we focus on lifting each other up, that we stand up for each other, for our health, for our planet, the air that we breathe and the water that we drink, for the rights of immigrants and working families.”

Finally, de Leon paid tribute to Hollywood Chamber of Commerce president and CEO Leron Gubler, who will be stepping down at the end of the year. When Gubler took over nearly 30 years ago, much of Hollywood was derelict.

“Leron stayed dedicated and committed, and during the course of 26 years he elevated the Hollywood Chamber of Commerce to international stature, where everyone now is proud to call Hollywood their home.”

Support from Hollywood also helped launch de Leon’s career in the Legislature, which began with four years in the Assembly before his election to the Senate in 2014.

“I’m committed to working with each and every one of you to keep Hollywood, Los Angeles and the entire Golden State, the state that we love, thriving in the spotlight for years to come,” he said.