In her work at the nonprofit ImmDef, which provides legal defense to immigrants, Lindsay Toczylowksi started seeing children as young as 2, 3 and 4 years old in detention centers without their parents months before the issue received national media coverage. 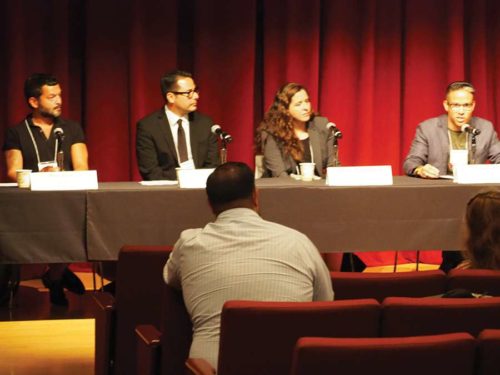 “It started with just a trickle at first and we started to think that maybe it was sort of the beta testing of what later became policy,” said Toczylowski, ImmDef founder and executive director.

Attorney General Jeff Sessions announced details of President Trump’s “zero tolerance” immigration policy in the spring, and soon detention centers were full of children who had been separated from their parents, and widespread media coverage led to national outrage over the Trump administration’s handling of the migrant families trying to enter the U.S.

Toczylowski joined a five-person panel discussion at West Hollywood City Council chambers on July 31 to discuss the ongoing effort to reunite children who were separated from their parents as a result of the controversial policy. West Hollywood Mayor John Duran, Mayor Pro Tem John D’Amico and Councilwoman Lauren Meister were among the small group in attendance.

Approximately 2,500 children were separated from their parents since the policy went into effect, and 1,400 were reunited by the time a court-ordered deadline passed last week. Hundreds more reportedly were not reunited for reasons including their parents had already been deported.

A legal battle is now underway to prevent reunited families from facing imminent deportation before they can consult immigration attorneys about their options.

“They still face a very challenging legal landscape as they leave detention together,” Toczylowski said.

Another panelist, Apolonio Morales, political director for the Coalition of Human Immigrant Rights of Los Angeles, asked, “How did we become a country that does this to children?”

Many of the migrants come from the Central American countries El Salvador, Honduras and Guatemala, and travel to the U.S. to escape war, political instability and economic hardship, according to the Migration Policy Institute, a nonprofit and nonpartisan think tank based in Washington, D.C. Central American migrants also leave their home countries to escape gang violence, in part fueled by the illegal drug trade that flows into the U.S.

“We can start to see why people move,” Morales said. “And so, as people come to our borders, into the U.S., seeking asylum and refuge, where we used to be a little bit more welcoming in terms of that, is now suddenly becoming this closed-door policy.”

For decades, America has sold people in other countries around the world on the “American Dream,” said panelist Tai Sunnanon, founder and CEO of consulting firm strategic insights group. But lately they’re facing a new set of hardships upon crossing the border illegally.

“Trump’s racist remarks even before the election about the immigrants and his desire to build a border wall indicated we were going to be involved in the fight for our lives,” she said.

Criminal charges for every person who crosses the border into the U.S. illegally has been the biggest difference between the Trump administration and past presidents on handling illegal immigration.

“From the very beginning, there wasn’t a process, there wasn’t a plan from the administration on how they were going to reunify the families,” she said. “So I think that sent a really clear message that they really didn’t have any intention of bringing the families together.”

Valdez-Cox added that the court order from U.S. District Judge Dana Sabraw toward the end of June to reunite families within 30 days has helped put a stop to family separation.

“We are obviously supporting all efforts to fight back against this racism that is driving this administration,” she said.

It is not Trump who is responsible for this.