Immaculate Heart High School began the first day of classes on Aug. 20, marking the school’s 113th year since its founding in 1906 at the corner of Western and Franklin avenues. 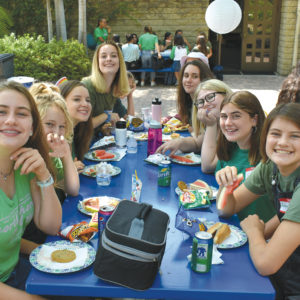 Joining returning students were more than 100 freshmen and a group of transfer students. Last Friday, the new students got a taste of campus life by taking part in freshman orientation. Guided by student leaders and volunteers, they met with teachers, located their lockers and received training on new laptops as part of the school’s one-to-one technology program.

Immaculate Heart Middle School also welcomed 70 incoming sixth graders, as well as new seventh and eighth graders, for orientation on Aug. 20. The orientation featured activities to introduce new students to their classmates and teachers. Each student received training on a new iPad that will serve as an additional classroom resource. The new students joined other middle schoolers for their first day of classes on Aug. 21.

Members of Immaculate Heart’s entire school community will end the first week of classes by coming together for an opening liturgy tomorrow, Aug. 24, followed on Aug. 25 by a back to school “IH Land Luau,” which will feature dancing, food and hula-hoop performances on campus.

Board of Education to hold special election for Rodriguez seat