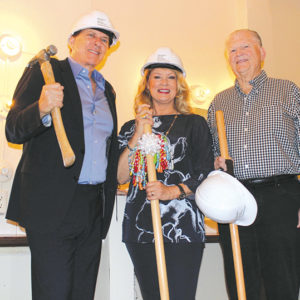 photo courtesy of Beverly Hills Temple of the Arts

In addition to High Holy Days and Sabbath services, Beverly Hills Temple of the Arts hosts concerts, film screenings, lectures and community programs at the Saban Theatre. Music producer Burt Sugarman and Mary Hart Sugarman, a 30-year television veteran and former anchor of “Entertainment Tonight,” are founders of Temple of the Arts.

The Burt and Mary Hart Sugarman Green Room will be used for media interviews with guests and speakers. The green room and star dressing rooms are components of a larger dressing room renovation project initiated by the late temple founder Martin Massman.

The Saban Theatre, originally a vaudeville movie house named the Fox Wilshire Theatre, was built in 1930 and designed by renowned architect S. Charles Lee. The theater, which is part of the League of Historic Theatres, is a Beverly Hills landmark and is included in the state of California and National Registry of Historic Places. Its preservation, restoration and modernization is supported by the Beverly Hills Performing Arts Center and members of the temple, the largest arts and entertainment-industry synagogue in the United States.

Beverly Hills Temple of the Arts is located at 8442 Wilshire Blvd. For information, visit bhtota.org.