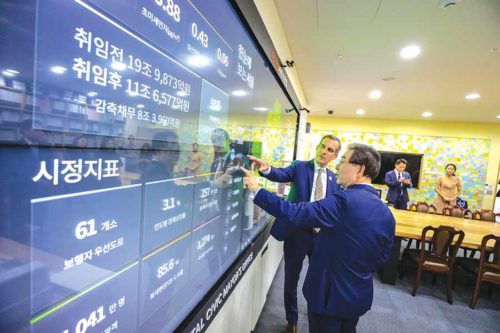 While in Tokyo, Garcetti worked to boost Japanese investment in L.A. – meeting with the Business Council for International Understanding and executives from several Japanese corporations.

The mayor also spoke to the Japan Business Federation, Keidanren, and the business membership of Mt. Fuji Dialogue – where L.A. business delegates held talks on potential partnerships with Japanese businesses.

On the 65th anniversary of the Korean War Armistice Agreement, Garcetti met with Prime Minister Lee Nak-yeon and discussed the strength of the U.S.-Korean relationship and the extraordinary achievements of the large Korean community in Los Angeles.

Garcetti and Seoul Mayor Won-soon Park observed the signing of a memorandum of understanding between the Tourism Business Department of Seoul Metropolitan Government and the Los Angeles Department of Convention and Tourism Development, together with Los Angeles Tourism and Convention Board, to strengthen cooperation in tourism marketing.