The Los Angeles County fire and sheriff’s departments have determined that a fire that erupted in a West Hollywood apartment building on Aug. 16 was accidental. 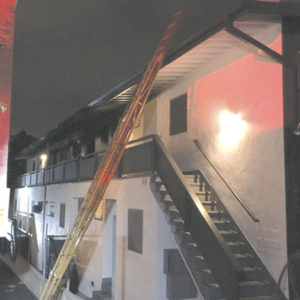 Sheriff’s deputies helped residents evacuate from the building on Clark Street. The fire was determined to be accidental. (photo courtesy of the LASD)

The blaze was reported at approximately 8:23 p.m. at a two-story building in the 1200 block of Clark Street, north of the Sunset Strip. Deputies from the West Hollywood Sheriff’s Station arrived and went door to door to help evacuate approximately 10 residents. Firefighters arrived to find flames and smoke emanating from the second floor.

“Two units were fully involved. The residents were not at the location,” said Alexis Miller, Los Angeles County Fire Department spokeswoman and firefighter. “There were no injuries.”

Firefighters from Los Angeles County, with assistance from the Beverly Hills Fire Department, extinguished the flames in approximately 30 minutes. Although the blaze was primarily contained to two units, two others sustained significant damage.

Representatives from the American Red Cross helped displaced tenants find temporary places to stay. Investigators with the sheriff’s department’s arson and explosive detail and the fire department determined the fire was started by an electrical problem.

“It was caused by a lamp malfunction,” Miller said.