In honor of the 80th anniversary of the first Kindertransport, Los Angeles Museum of the Holocaust presents the newly curated exhibit “Childhood Left at the Station” running from Sunday, Aug. 26, through Monday, Dec. 31. 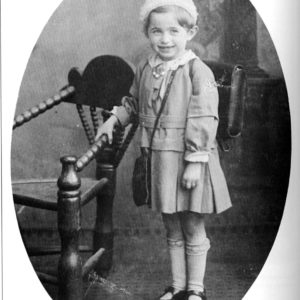 The exhibit features artifacts, photographs and personal narratives from 10 children saved by the Kindertransport (Children’s Transport) rescue effort. Kindertransport allowed approximately 10,000 Jewish refugee children to escape from Nazi-occupied territory to Great Britain and other countries between 1938 and 1939. The first Kindertransport train left a Berlin station with approximately 200 children in December 1938. Often, the children were the only members of their families who survived the Holocaust.

“When we were first conceiving this exhibition last year, never did I imagine that the topic of refugee children being separated from their parents would be so timely and relevant. This is truly a tremendous opportunity to learn from the past,” said Jordanna Gessler, LAMOTH director of education and exhibit curator.

“Through the child survivors’ personal artifacts and experiences, visitors will learn how these Kinder, in spite of their traumas and individual encounters, were able to achieve successes both professionally and personally,” added Gold, who authored “Memories That Won’t Go Away: A Tribute to the Children of the Kindertransport.”

Gold will be one of the speakers at a special opening event on Sunday, Aug. 26, at 3 p.m. Other speakers include British Consul General in Los Angeles Michael Howells; Deborah Oppenheimer, producer of “Into the Arms of Strangers”; Ron Meier, executive director of the American Society for Yad Vashem; and Amanda Susskind, ADL regional director and daughter of Kindertransport survivor Charles Susskind.

On Sunday, Sept. 16, at 3 p.m., the museum will show Oppenheimer’s Academy Award-winning documentary “Into the Arms of Strangers: Stories From the Kindertransport.” A discussion with the producer will follow the film. Admission is free but a reservation is required by visiting lamoth.ticketleap.com.

LAMOTH is located at 100 S. The Grove Drive, in Pan Pacific Park. For information, visit lamoth.org.