The city is taking steps to install a new crosswalk on Hollywood Boulevard and Rodney Drive in a neighborhood near the East Hollywood, Los Feliz and Silver Lake border. 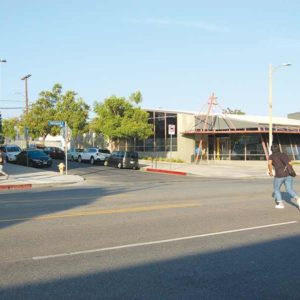 Pedestrians frequently dash across Hollywood Boulevard when crossing at the intersection of Rodney Drive. The city plans to install a crosswalkfor improved safety on the street. (photo by Edwin Folven)

Councilman Mitch O’Farrell, 13th District, introduced a motion on Aug. 22 to use approximately $24,500 from the Hollywood Mobility Trust Fund and the Council District 4 Real Property Trust Fund for the crosswalk. Councilman David Ryu, 4th District, co-introduced the motion, as the intersection is near the border of the 13th and 4th council districts. The site is located just east of Vermont Avenue in an area gaining in popularity, O’Farrell spokesman Tony Arranaga said.

“The crosswalk is being installed to promote pedestrian safety along a busy stretch of Hollywood Boulevard that has neighborhood-serving small businesses on both sides of the street,” Arranaga added. “We are installing a pedestrian activated rectangular Rapid Flashing Beacon, coupled with a median island.”

The nearest crosswalks are approximately 500 feet to the west at Vermont Avenue and east at Lyman Place. Matthew Gardocki, director of the La Luz de Jesus Gallery at the northwest corner of Hollywood Boulevard and Rodney Drive, said he regularly sees people crossing at the intersection. Many run to avoid fast-moving traffic and cross diagonally to the opposite corner of Rodney Drive, which ends at the intersection with Hollywood Boulevard.

“Everybody cuts from here to go to across. There is definitely a potential [for a collision],” Gardocki said. “They should do it before anything happens.”

Rabbi Leibel Korf, of the Chabad of Greater Los Feliz on the south side of Hollywood Boulevard at Rodney Drive, agreed that a new crosswalk is needed.

“Anything they can do with safety is a good thing,” Korf added. “I hate seeing people with children or the elderly who think they can cross the street and they will be fine. You never know when a car isn’t going to stop or is going to make a U-turn. The life of one person cannot be replaced. Anything they can do to save a life is worth years of work.”

The timeline for installation of the crosswalk is still being determined.

[…] districts 4 and 13, Councilmembers David Ryu and Mitch O’Farrell have teamed up to get a crosswalk installed at the intersection of Hollywood Boulevard and Rodney Drive. According to the Beverly Press, the […]