Rom-coms traffic in recognizable conventions: clashing with the parents, lavish parties, culture clash, an airport chase to find bae before it’s too late. But rarely does this formula allow something charming and sincere to leak through. “Crazy Rich Asians” is that special exception, a triumph in style and scope in a genre marred by repetition. 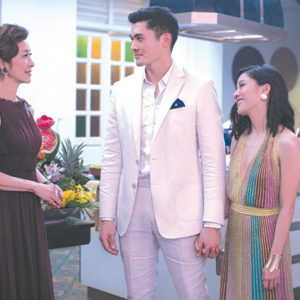 Some backstory first. American cinema sucks at Asian representation. In television history alone, only two shows have ever focused on Asians families: 1994’s “All-American Girl” and “Fresh Off the Boat,” starring “Crazy” female lead Constance Wu. Film history ain’t much better, often writing Asian characters out of stories – as is the case with anime adaptations like “Ghost in the Shell” and “Death Note” – or placing them in the background. So, a film with a majority-Asian cast is something as audacious as Marvel Studio’s all-black casting in “Black Panther.”

After Kevin Kwan wrote his book series that began with 2013’s “Crazy,” early interest in film adaptation came with an outlandish caveat from one producer: get a white face in there as a protagonist. Ya know, completely change a story about an Asian-American woman meeting her boyfriend’s Singapore family. Replace ethnic complexity that dares to see Asian folks as something beyond a singular category.

Luckily Kwan waited for a production team willing to tell the story he intended. And who would’ve thought director Jon M. Chu – the dude who helmed “Jem and the Holograms” and a couple “Step Up” films – would be up for it. Largely, his filmography falls flat (though his 2010 web series “The LXD” is quite enjoyable), but a switch to rom-com proves his talents were merely misplaced, lost in a studio system too scared, too stubborn, too vanilla.

Rather than stylistically play it safe, “Crazy” allows a slew of stories to dance across the screen. At the heart of the story is NYU econ professor Rachel Chu (Wu), who specializes in game theory (hardly the bland damsel of rom-coms past) and is thrust into the unknown life of beefcake BF Nick Young (Henry Golding), the son of the richest family on the island. What should be a fun vacation to meet the relatives transforms into a series of extravagant events – including a wedding that’ll make you mad you couldn’t afford a small river instead of a normal aisle to walk down – peppered with jealous, judgmental spectators wondering why local royalty would seek love in another country, especially the United States, where family values are quite different. Stateside, they often replace the needs of the family for one’s own selfish interests, as matriarch Eleanor Sung-Young (Michelle Yeoh) tells Rachel. Don’t ask about mom’s gorgeous wedding ring if you don’t want a story that ends with why you aren’t good enough for her baby boy.

While mom ain’t a fan, Nick is nothing but a gentleman, infatuated with Rachel but conflicted about how to find love on his own, removed from family burdens. His primary weakness is doing so in silence, never telling Rachel the complete truth about the fam. Perhaps the film’s only flaw is how quickly this issue is addressed and discarded.

Beyond our Cinderella and Prince Charming, “Crazy” has more to say, particularly about Nick’s sister Astrid (Gemma Chan), the most philanthropic member of the family, kind-hearted, facing her own struggles at home. Her story remains open-ended, but more films are on the way to better explore all the storylines from the book series.

And then there’s the insane supporting cast. Awkwafina (“Neighbors 2,” “Ocean’s 8”), as Rachel’s old college friend Peik Lin Goh, is the most hilarious character of the bunch. And that says something considering we’re also blessed with the likes of Ken Jeong (Señor Chang from “Community”), Ronny Chieng (“The Daily Show”) and Nick Santos (NBC’s “Superstore”), who enjoy many memorable moments.

OK, now we need to talk about something important. In the 1970s, film theorist Laura Mulvey introduced the concept of the male gaze, the idea that a film takes on a male point of view, objectifying women while it focuses on male stories. “Crazy” tries something else. The women bare little skin, while the film’s male hunks show off abs none of us dad-bod dopes will ever experience. That’s a huge win, again, considering pop culture’s terrible history when it comes to a lack of eroticizing Asian male bodies.

“Crazy Rich Asians” is hardly the funniest film, but what it lacks in gut-busting jokes it more than compensates for in heart. While the book series functions as romance and satire, the film places the story in a clearly established Western genre. That’s OK for now, but as the film series moves forward, here’s to shattering even more glass ceilings.