Rent stabilization in Beverly Hills, which has led to a contentious debate between landlords and tenants, now faces a legal challenge from a local apartment owner advocacy group.

The Apartment Association of Greater Los Angeles filed a lawsuit in U.S. District Court last week arguing that the city’s rental registry, in which landlords have to disclose information such as rent amounts and tenancies for each of their units, is unconstitutional. 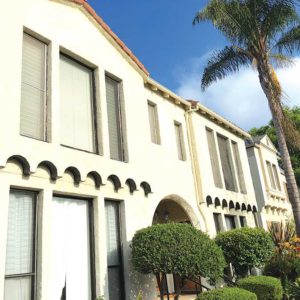 Multifamily housing units in Beverly Hills are subject to the rent stabilization measures, and owners of properties have spoken at City Hall in opposition to restrictions on rent increases, no-cause evictions and other terms under review. (photo by Luke Harold)

“The city would be better served by obtaining this confidential information directly from the tenants themselves, should they wish to offer it, rather than imposing this onerous rental registry on income property owners,” Daniel Yukelson, executive director of the Apartment Association of Greater Los Angeles, said in a statement.

Earl Vaughan, president of the organization’s board, claimed that the rental registry “represents a de facto registry of residents and rents without any sort of due process.”

“The city of Beverly Hills is conducting an ongoing ‘fishing expedition’ without reasonable suspicion and has discarded any and all probable cause standards in its efforts to gather what amounts to confidential data about renters,” he said.

Last year, the Beverly Hills City Council approved an urgency ordinance that limited rent increases to 3 percent (since raised to 4.1 percent), made no-cause evictions reviewable by the city and established a rental registry. The city has been working with both sides to develop long-term provisions ever since.

According to the city, all but one housing provider complied with the registration requirements by the January deadline.

City Attorney Larry Wiener said in a statement that the City Council “values the rights and privacy of our residents and only seeks this information to ensure all housing providers are abiding by the city’s Rent Stabilization Ordinance.”

“In addition to a public discussion on the issue last week, the city will continue to host meetings between housing providers and tenants led by a professional mediator as we work toward some agreement regarding the ultimate terms of the rent stabilization ordinance,” he said.

Orit Blau, an owner of a property in Beverly Hills subject to the Rent Stabilization Ordinance, is named as a plaintiff in the lawsuit along with the Apartment Association. Many other landlords have attended City Council meetings to argue that restricting rent increases inhibits them from making enough revenue to adequately maintain their properties, and that no-cause evictions are necessary for removing problem tenants. Landlords have also said the most vulnerable tenants, such as the elderly and disabled who are most in need of rent stabilization measures, do not constitute the majority of their tenants.

Before the urgency ordinance was approved, longtime tenants said they were feeling increasingly vulnerable to rent increases they couldn’t afford and no-cause evictions that could force them from the city. Council members said the registry will enable the city for the first time to compile data on rent increases and evictions.

Attorney Frank A. Weisner is representing the Apartment Association, which filed a similar lawsuit against the city of Los Angeles. Weisner also won a case, Patel v. city of Los Angeles, in which the U.S. Supreme Court ruled 5-4 that it was unconstitutional for the the city to require hotel and motel operators to make their registries with information about guests available for inspection by police.

Beverly Hills adopted a Rent Control Ordinance in 1978, and rent stabilization has been in effect in Beverly Hills since 1979. Approximately 60 percent of Beverly Hills residents are renters, according to the city.

The city hired Sukhsimranjit Singh, an assistant professor at Pepperdine University, last summer to host a series of mediation sessions between tenants and landlords. The most recent was held on Aug. 15 and focused on relocation fees, just cause evictions, the Ellis Act and habitability standards. Two more sessions will be held at City Hall, Aug. 26 and Sept. 16, each from 1 to 5 p.m.

Head of Hollywood Property Owners Alliance to step down