Donate blood with the LAPD and help save lives

Blood supplies drop during summer because of fewer donors, so Cedars-Sinai Medical Center created a friendly competition three years ago among police stations in the LAPD’s West Bureau to help boost the supply. 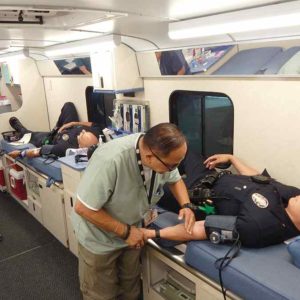 Officers from the Hollywood Division will donate blood as part of a competition between police stations in the LAPD’s West Bureau. The public is invited to donate at the Hollywood blood drive and other upcoming drives at the West Los Angeles, Pacific and Wilshire/West Traffic divisions. (photo by Edwin Folven)

This year’s competition kicks-off today at the Hollywood Division from noon to 6 p.m., and the public is invited to help. Join officers and personnel in donating at a bloodmobile parked in the station’s lot at 1358 N. Wilcox Ave. Donors receive a free T-shirt and help the hospital continue providing life-saving surgeries and transfusions.

“For years, the LAPD has come [to the hospital] to donate blood,” said Veronica Bauer, recruitment coordinator for Cedars-Sinai Blood Donor Services. “I thought competitions always get people out and it’s fun to compete against each other … and that’s how the competition was born. It’s been very successful. It’s really a symbiotic relationship.”

The Hollywood Division will compete against the West Los Angeles Division, which will host a blood donation on Tuesday, Aug. 28, from noon to 6 p.m. at 1663 Butler Ave.; and the Pacific Division, where blood will be donated on Wednesday, Aug. 29, from 2-8 p.m., at 12312 Culver Blvd. The Wilshire and West Traffic divisions, which are next door to each other at 4861 W. Venice Blvd., will host the final blood donation event on Tuesday, Sept. 4, from 10:30 a.m. to 4:30 p.m. The police station that donates the most blood wins a free lunch.

“Blood drives are particularly important examples of community partnership with the LAPD,” said Capt. Steven D. Lurie, of the Hollywood Division. “By encouraging folks to donate blood, and literally save lives, we are helping the entire Hollywood community. By hosting this event at Hollywood Station, we are showing this is not just a police station, but a community hub for service to all of Hollywood.”

Capt. Aaron McCraney, of the Wilshire Division, reiterated that the blood donation competition is a public service.

“Donating blood is one of the most precious gifts that one can offer and an excellent opportunity to help those in need,” McCraney said. “LAPD has a long history of supporting blood drives and Wilshire Division is honored to host this important event.  Once again Wilshire Division and the community partner for the benefit of a worthy cause.”

Heather Beller, a civilian senior administrator in the Hollywood Division’s community relations office, said personnel at the station are hoping to take top honors this year.

“Usually we have 30 or more people donate, and we are expecting a lot of them to participate,” Beller said. “It comes down to helping save lives.”

Bauer added that she is optimistic the competition will surpass last year’s totals, and encouraged everyone to donate.

“One of the reasons we hold the blood drives in the summer around Labor Day is that blood supplies drop because people are on vacation or have less time to donate,” Bauer said. “The need for blood never stops. Hopefully this year, the numbers will be stupendous.”

Reps. react to verdicts in Cohen, Manafort cases on Tuesday