Head of Hollywood Property Owners Alliance to step down

After serving as the executive director of the Hollywood Property Owners Alliance for over 20 years, Kerry Morrison will be stepping down from the role overseeing the Hollywood Entertainment District to focus on improving mental health services in Los Angeles. 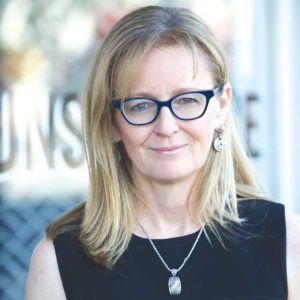 During her tenure at the Hollywood Property Owners Alliance, Kerry Morrison often saw mentally ill individuals struggle with homelessness. Stepping down from her HPOA position, Morrison will be focusing on how to improve mental health services in Los Angeles next. (photo courtesy of Kerry Morrison)

“After the business improvement district was renewed for another 10 years in June, it just seemed like the right time,” Morrison said. “I just had the sense that my work was done.”

Morrison joined the alliance when the Hollywood BID was newly formed in 1996. The area was “gritty and rundown,” she said, but the opportunity excited her.

“I knew it would get me out of the office and into the trenches at the street-level,” Morrison said. Prior to her role at HPOA, she had worked in public policy at the California Association of Realtors.

As the head of HPOA, Morrison has worked to ensure the streets of the area are clean and safe, employing a private security patrol and developing a maintenance plan to wash sidewalks, trim trees and paint over graffiti. It has been under her leadership that the Hollywood district, which includes the Walk of Fame and the Egyptian and Chinese theaters, among many other tourist destinations, saw $4.8 billion in investments for retail, residential and business projects.

“For more than 20 years, Kerry has brought tireless persistence to building a brighter vision of Hollywood. Few have contributed more to improving the quality of life in Hollywood for residents, visitors and tourists,” HPOA President Chad Lewis said. “Her inspired leadership helped make our Hollywood neighborhood an economic powerhouse for the city.”

However, during her tenure as executive director, Morrison also often saw many mentally ill homeless individuals on the streets of Hollywood, marginalized from the community and healthcare systems. Several homeless individuals in the area died because they lacked the proper care, she recalled.

“I began asking – why is it so hard to get people who are mentally ill off the street?” Morrison said.

As a result, Morrison involved herself with the Durfee Foundation, which works to develop community in Los Angeles, and was awarded the two-year Stanton Fellowship in 2016 for her inquiries into mental health services. The fellowship, which enabled her to take three months off work, took her to Trieste, Italy, a city that has been recognized by the World Health Organization for its continual success in treating mental health. In the late 1970s, Trieste closed all of its psychiatric hospitals, and in their place, established 24-hour health centers.

“Their approach in Trieste is very simple. It’s very focused on the whole person and on the idea of ‘social recovery,’ which is where they try to reconnect a person with the community and their family,” Morrison said. “It was such a stunning distinction to see. I came back really inspired.”

Morrison will officially step down from HPOA on Feb. 1, 2019. She does not know yet the specifics of how she will implement her ideas, but she plans to bring what she learned about mental health services in Trieste to Los Angeles and is “exploring all of her options, including work through foundations and the government.”

“I’m very excited about what comes next,” Morrison said. “There’s a lot to work on here in Los Angeles.”

Back to school at BHUSD