Rodeo Drive shimmered Aug. 2 as people attended the first night of Beverly Hills Open Later Days, also known as BOLD. The evening sun cast golden hour light across façades, twinkling lights wrapped around the trunks of palm trees and retail shops’ signs glowed late into the night. Before guests headed home, fireworks illuminated the sky. The event marked the beginning of a second summer of programming organized by the city of Beverly Hills to modernize the shopping, dining and entertainment in the neighborhood. 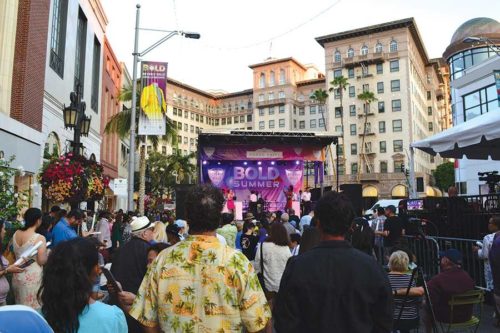 BOLD attendees listened and danced to music by Amanda Castro Band and Project M on the first night of this summer’s Beverly Hills Open Later Days. (photo by Sarah Davidson)

Attendees enjoyed music performed by Amanda Castro Band and Project M, dancing in front of the glowing pink and purple stage. Photo-op booths, set up along Rodeo Drive, attracted selfie-takers, and food trucks lined the streets. Couples sipped bubbly beverages in the champagne garden, and people set up folding chairs on the sidewalk to relax and enjoy the scene.

“The music is good, the vibe is excellent, I love it,” said Gia Sneed, 52, a Miracle Mile resident and lieutenant with the Los Angeles County Sherriff’s Department who’s worked with the department for approximately 30 years. “I just love the artistic flow that’s going on right now.”

Throughout the summer on Thursdays, Fridays and Saturdays until 8 p.m., BOLD will feature programming such as live music from artists Eric E. Ensemble and Serafia, floral installations and living artwork by Alexa Meade in which human forms become part of a 2D painting.

Beverly Hills restaurants are offering freebies and discounts for shoppers when they show receipts from local retailers obtained after 6 p.m. on BOLD nights. The Briskin Bar at The Wallis has even developed a BOLD-themed cocktail: the Piña Boldadas, a coconut-flavored La Croix with a mini bottle of Malibu Pineapple Rum suspended upside-down atop the can.

BOLD will wrap up with Beverly Hills’ annual block party on Aug. 25.

“The stores are open late, the restaurants are open late,” said Beverly Hills Mayor Julian Gold. “Whatever you’re looking for, we have a restaurant that will meet that palate, from the high end to the low end. Everything here is just really fun.”