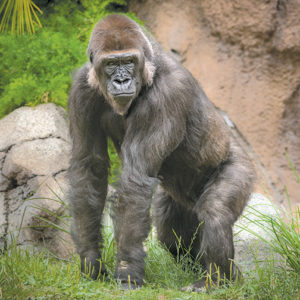 Ndjia, a western lowland gorilla, has joined other members of the species at the Los Angeles Zoo’s Campo Gorilla Reserve exhibit. (photo by Jamie Pham)

Ndjia has been paired with the zoo’s male silverback gorilla, Kelly, through a species survival plan program that breeds western lowland. Ndjia was slowly introduced to her new family, and she quickly made a place for herself with the other members, Kelly, 31, Rapunzel, 24, and Evelyn, 42.

“What a spitfire,” said Nancy Bunn, senior animal keeper at the Los Angeles Zoo. “Ndjia may be smaller than the others but she sure has spunk. In the short time that Ndjia has joined us, she quickly learned to navigate her way within this family group. I believe her captivating personality, along with the other gorillas, is sure to engage visitors and ultimately ignite a desire to learn more about their conservation story in the wild.”

Western lowland gorillas are native to the lowlands and swamp forests of Cameroon, Central African Republic, Equatorial Guinea, the Democratic Republic of the Congo, Gabon and Angola. The peaceful animals are social and live in stable, cohesive groups composed of one silverback adult male, several adult females and their offspring. Guests can view Ndjia and the rest of the group at the Campo Gorilla Reserve exhibit daily, weather permitting.

The move has allowed Ndjia to be placed in a breeding situation for the first time in her life. Potential offspring from gorillas will help educate people about a species that is currently considered critically endangered due to illegal hunting, disease and habitat degradation and destruction. Despite the fact that all killing, capture and consumption of great apes is illegal, hunting for bush meat is the primary reason for the Western gorilla’s decline.

The L.A. Zoo encourages guests to participate in gorilla conservation through its on-site cell phone recycling program. The zoo partnered with Eco-Cell in 2009 to install a collection bin near the entrance for old cell phones. Coltan, one of the components used in manufacturing cell phones, is mined in the forests of the Democratic Republic of Congo. The mining process destroys the forest, leaving the animals homeless and vulnerable to poachers.