The West Hollywood City Council voted to continue evaluating design options for a Sunset Strip billboard project that will include digital advertising, arts programming and a public plaza.

In the 3-2 decision during its July 16 meeting, council members John Heilman, Lindsey Horvath and Lauren Meister voted to explore the possibility of scaling down the 72-foot-tall, three-sided design, which will replace a two-sided billboard at the city-owned parking lot at 8775 Sunset Blvd. 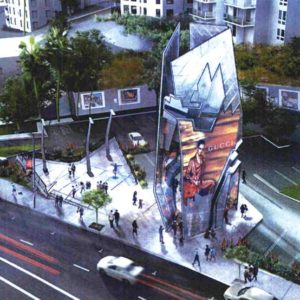 Some West Hollywood residents and council members have said they are concerned about the size of the project. Many other residents voiced their support for the current design at the council’s July 16 meeting. (rendering courtesy of the city of West)

Heilman and Meister said concerns from the neighborhood were not adequately taken into account by city staff.

Meister said she thought the proposal was “not fully vetted with the community.”

The project was designed by Tom Wiscombe Architecture, and developed by Orange Barrel Media. The project design before the council had received a lot of media attention and won a 2017 Next L.A. Award from the Los Angeles Chapter of the American Institute of Architects.

According to city staff, the city’s revenue from the billboard would range from $14-20 million over the course of a 10-year site license agreement with Orange Barrel, pending any changes to the project the council makes. Heilman said that scaling down the project might reduce the city’s projected revenue, “but that’s not the primary concern.”

The Museum of Contemporary Art is also part of the project. The museum will curate “major artistic commissions” along with “local and emerging artworks” approved by local curators, according to city staff.

In a public outreach summary based on a series of meetings city staff attended throughout 2017, the project’s size, location and lights within close proximity to residences were among the concerns. There was also support for the art component and residents said the digital billboards would enhance advertising on the Strip.

“It’s unfair to judge whether this proposal sinks or swims by that,” he said. “That’s not the context for sending in comments.”

“One of the biggest challenges about the Strip is that it’s constantly evolving,” Duran said, adding that council shouldn’t “constrain it to ideas of the past.”

The majority of residents who spoke during public comment were supportive of the project.

West Hollywood resident David Nash said he appreciated the outreach to tenants in his building regarding the project, which he added would be a welcome addition to the Strip.

“As the creative city, we deserve more fabulousness, a little excitement, innovation,” he said.

But another West Hollywood resident, Elyse Eisenberg, called it “an abomination.”

“Again and again people came out and they talked about how they didn’t like the look of this project,” she said.

The project originated in October 2015, when the city issued a request for proposals. Orange Barrel emerged from a field of 10 proposals. The company’s proposal was rated highly in the creativity, innovation and financial benefit to the city criteria that a city-assembled selection panel chose from.

The Planning Commission and the City Council will review potential changes to the project.