The team behind 1250 Fairfax joined with West Hollywood leaders last week for a groundbreaking that kicks off construction of a 53-unit apartment building on Fairfax Avenue, just south of Fountain Avenue. Approved unanimously by the West Hollywood Planning Commission, the residential project includes 12 affordable units for low and moderate-income residents. 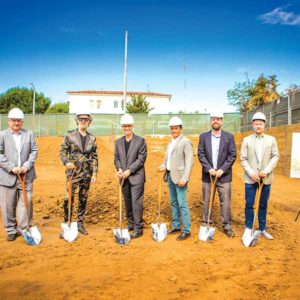 The five-story development, slated for completion in 2020, will transform a long-dormant site with residences located within four buildings connected by a network of open bridges and walkways, and organized around a central cluster of semi-public courtyards. The contemporary take on the traditional courtyard style was designed by award-winning Culver City based R&A Architecture + Design and includes intimate nooks for dining and entertaining. It was inspired by the works of famed Southern California architect Irving Gill.

Over a century ago, Gill designed the legendary Dodge House in West Hollywood. Although the property was demolished in 1970, it remains a beloved feature of West Hollywood’s architectural history due to its modern design and ahead-of-its-time features that became emblematic of many Southern California residences.

The property will have one-, two- and three-bedroom homes, with spacious living areas and adaptable rooms that can be utilized for home offices or creative studios. Additionally, 1250 Fairfax includes modern amenities such as a rooftop pool and club room. The rooftop deck will feature sweeping views of Los Angeles from the Hollywood Hills to Century City to the downtown skyline. Other amenities include a wellness studio, catering kitchen and co-working space.

The property is located on Fairfax Avenue within walking distance of vibrant shopping, dining and entertainment offerings on the Sunset Strip, Santa Monica Boulevard and Fairfax Avenue, offering easy access to some of the best attractions in West Hollywood.