Task force takes ‘ghost guns’ off the streets in Hollywood

Members of an LAPD/ATF joint task force on July 5 announced the arrest of 10 individuals accused of weapons violations in connection with an illegal operation in Hollywood in which gun parts were purchased online and through the mail and assembled into untraceable complete firearms. 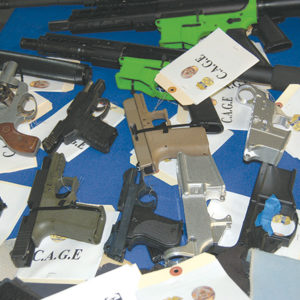 Numerous guns in various stages of assembly that were confiscated by law enforcement were displayed during a press conference announcing the arrests of 10 individuals accused of felony firearms violations.

“The investigation resulted in more than 45 firearms, high-capacity magazines and pounds of methamphetamine taken off the streets,” said ATF Los Angeles Field Division Special Agent in Charge Bill McMullan. “Search warrants at the end of the investigation resulted in the seizing of firearms, manufacturing tools and materials used to build AR-style rifles and pistols from unfinished lower receiver kits. This is a common trend ATF is seeing in So Cal amongst gangs. Criminals building their own guns, since they are prohibited from buying guns legally.”

The arrests were the result of a six-month operation that involved more than a dozen undercover firearms purchases. The individuals in custody allegedly have ties to an East Los Angeles street gang.

They are accused of buying gun parts from out-of-state manufacturers online and by mail – which can be done legally without the buyer undergoing a background check – and then putting them together at different locations in Hollywood, including low-rent motels. The complete firearms, known as “ghost guns,” were allegedly sold to gang members. The gun parts can be purchased legally, but selling them as complete guns is illegal.

The suspects were allegedly involved with the illegal possession, transportation and sales of “ghost guns” and assault weapons. Approximately 50 firearms, a firearm suppressor, numerous high capacity magazines, ammunition, assault rifle manufacturing equipment and parts, over three pounds of methamphetamine, vehicles, body armor and money were seized by law enforcement. Approximately 10 of the “ghost guns” were handguns, while the remained were AR-style rifles, as well as one AK-47 and one SKS rifle.

The suspects face 47 felony charges including the manufacture, transportation and sale of assault rifles, possession of a silencer and criminal conspiracy.