A new building at the southeast corner of La Brea Avenue and San Vicente Boulevard will soon be occupied by a Target, Sprouts Farmers Market and other retailers. 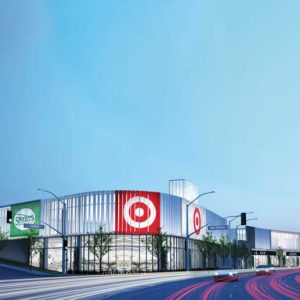 The CIM Group project replaces numerous small auto shops that formerly occupied the site in the neighborhood south of the Miracle Mile. The 87,000-square-foot building will have two levels above ground. Three hundred parking spaces will be interspersed in a subterranean structure, as well as on a portion of the second level and the roof.

The neighborhood was zoned for retail/commercial projects so the development was “by-right,” meaning it did not need to go through a lengthy planning process. It is located in Los Angeles City Council President Herb Wesson’s 10th District.

“The new retail center will not only create a swell of jobs in the area, but will also provide our surrounding communities with additional access to fresh and affordable groceries and diverse retail options,” Wesson said in a statement.

The stores are scheduled to open in early 2019. CIM Group, which owns the Hollywood & Highland Center as well as many other retail and residential properties in Los Angeles, is in the process of signing leasing agreements with other retail tenants at the La Brea/San Vicente project site, spokeswoman Karen Diehl said.

Michael Burrows, who lives a few blocks west of the new development near San Vicente Boulevard and Cochran Avenue, walked by the project on July 2. He said the neighborhood is changing.

“I think it will bring more opportunities for shopping. There isn’t anything like that around here now,” Burrows said. “I knew something big was going in. They are building everywhere. It will be good. Traffic is already an issue, so we’ll see what this does, but I think it’s good.”

Conrad Starr, president of the Sycamore Square Neighborhood Association, added that the association hadn’t taken a position on the project but was aware it was “coming soon.”

The new store follows the opening earlier this year of a Target store on Virgil Avenue in Koreatown. That store is smaller than traditional Targets, and it’s unclear whether the La Brea/San Vicente store will follow the same format.

Target Corporation also plans to open smaller stores in Anaheim and La Cañada-Flintridge later this year. The future of an unfinished Target store at the corner of Sunset Boulevard and Western Avenue in Hollywood remains in limbo after the city lost a lawsuit filed by a nearby homeowners group to block the project. Legal proceedings over whether the city violated zoning laws when approving the Hollywood Target store are pending in state court and no new date has been set for consideration.

Sip a taste of Sydney in DTLA at Paramount Coffee Project

UGH! The traffic hell! Didn’t anyone object to this? “Affordable” for the area? What “area” are they servicing? The “area” your paper traditionally applies to doesn’t equate to that term. Yes, everyone shops at all levels, but do/did we really need this monstrosity? Look what happened further down on La Brea.

I think it is wonderful the area south of Wilshire needs to be able to provide services for our neighborhoods! Most of the present businesses are auto body repair. We need retail services too! My neighbors and I are looking forward to the new target and other stores. Please soon!!

Corporations and the City only care about the $$$ that comes to town. What’s a little inconvenience to them when it comes to parking?

It’s good thing and far better than whatever was there previously. I concur on the issue of traffic but that issue exists throughout the city. It’s the new normal!

Great Idea! And Blessed A lot of People with Jobs! Near home…Like me! Sprouts here I come

The Sprouts seems like a good addition as of now.

With that said, I do not believe Target should be here. There is a Target just down the street on La Brea north of San Vicente and another one on La Cienega and Obama Blvd. It is absolutely ridiculous that they add another one. Target is NOT bringing good jobs to this area. It is really about time that people stop regurgitating basic answers about so-called development. We do not need minimum jobs in mid-city. Aside from minimum paid jobs, Target is a corporation that mostly gives part-time so that they have to pay as little benefits as possible. We need to keep these retail stores from expanding further when they are not really bringing necessary jobs that are needed in Los Angeles. Having this Target is just as bad as having a Walmart.