We have enough white protagonists flaunting their privilege on screen to last far too many lifetimes. For that matter, do we another musical full of ABBA B-sides while we wait for “Dancing Queen” to reappear in a “different” way? That’s “Mamma Mia! Here We Go Again,” a quaint rom-com with remarkably uninteresting musical performances. 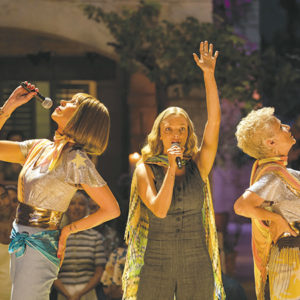 To be clear, I fancy myself a musical apologist, though I’m not swayed by films like “La La Land,” “Les Miz” and, you guessed it, “Mamma Mia!” Following my review of that last one, I even received some negative feedback from a fan who claimed I needed to “calm down.” This one ain’t gonna be much better folks. For me, “Here We Go Again” is the kind of film a friend puts on that prompts a world-record eye roll whilst declaring “here we go again” with as much negative connotation as possible.

For fans of the film, I truly apologize. I don’t wish to be a killjoy, but I’m just so tired of musicals that don’t live up to their Broadway roots. Where’s the spectacle? How about more intricate choreography? Or at the very least, can the singers have more energy?

These questions haunt me throughout the second chapter in Sophie Sheridan’s (Amanda Seyfried) life, as she approaches the anniversary of her mother’s death. Yes folks, Meryl Streep’s Donna is gone; Miranda Priestly don’t do sequels. But fear not, while Sophie prepares for the reopening of Hotel Bella Donna, we embark on a flashback story with young Donna (Lily James) on the European travels that led her to the three men who become Sophie’s fathers (see the first film, I don’t wanna get into it here). So “Here We Go Again” is basically “The Godfather: Part II” but with island shenanigans instead of a body count.

About those suitors. The 20-something versions of Harry (Hugh Skinner), Bill (Josh Dylan) and Sam (Jeremy Irvine) have none of the chemistry or charisma of their older, better selves. They do, however, reek of an Abercrombie swagger that normally compliments a good punch in the face to take them down a few pegs. 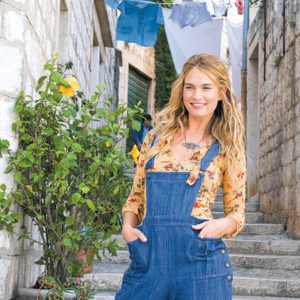 As for the older version of the three dads, Harry (Colin Firth), Bill (Stellan Skarsgård) and Sam (Pierce Brosnan), their stories move to the background, their chemistry together mutated into an occasional hug and reflection on the old days. Side note: at least the filmmakers learned their lesson regarding Brosnan’s flat singing chops. In his solos, someone turns the mic down, while he delivers delicate melodies, mumbling like a Ryan Gosling disciple à la “La La.” The effect is laughable.

While the papas get shelved, at least Donna’s BFFs Rosie (Julie Walters) and Tanya (Christine Baranski, who can do no wrong) enjoy a bit more screen time, including their younger counterparts, played by Alexa Davies as Rosie and Jessica Keenan Wynn as Tanya. Baranski’s Tanya also has the pleasure of delivering the film’s best line when she first encounters the dashing hotel manager Fernando Cienfuegos (Andy Garcia).

“Here We Go Again” has plenty to like, more ABBA music and a story structure that surprisingly balances two main plots and a series of subplots without feeling clunky. That is until Cher arrives. Yes, Cher is in the film (I won’t say who she plays). And when that happens, storytelling stops, logic stops, concern for other characters stops. Cher is a show stopper, and that’s a problem when the film needs to neatly wrap things up but still milk that star power as much as possible.

I already hear the dissension. “But it’s a delightful film; just enjoy the romp.” Too late, Meredith. I reject the notion that cute cinema can’t do more. And the musical performances, so lifeless. But that’s what you get with actors instead of more seasoned Broadway players on screen. And the lazy cinematography, more interested in sweeping shots of gorgeous locales than accentuating intimate moments, sure doesn’t help.

I need my musicals to have some razzle-dazzle, some spectacular-spectacular. Instead, “Mamma Mia! Here We Go Again” settles for generic feels and tedious coincidence. At least the Most Interesting Man in the World (Jonathan Goldsmith) cameos. Stay thirsty for a better musical, my friends.

Line up for Brew at the L.A. Zoo