Pink’s Hot Dogs welcomed LeBron James to the Los Angeles Lakers with a new banner unveiled on July 3. And if that isn’t enough excitement, World Cup fever has hit L.A., and what better way to celebrate your favorite team than with a World Soccer Dog at Pink’s Hot Dogs during National Hot Dog Month. It is a 9-inch stretch dog with grilled steak, coleslaw and barbecue sauce. World Soccer Dogs are available through the final match on Sunday, July 15. 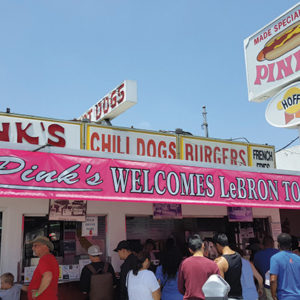 Customers lined up to get their favorite Pink’s Hot Dogs on Tuesday as the iconic stand at Melrose and La Brea unfurled a new banner welcoming LeBron James to Los Angeles. (photo courtesy of Pink’s Hot Dogs)

Feeling patriotic? Enjoy the America the Beautiful Dog, a 12-inch jalapeño sausage topped with pastrami, bacon, lettuce and chopped tomatoes. It is the perfect summer food, said Richard Pink, who operates the stand with his wife Gloria and sister Beverly Pink Wolfe.

“The America the Beautiful Dog is one of our classic dogs that we use to celebrate National Hot Dog Month,” Pink added. “Everybody loves it.”

Pink’s has been an icon in Hollywood since 1939 when Richard and Beverly’s parents, Paul and Betty Pink, started with a pushcart near La Brea and Melrose avenues. Pink’s offers more than 35 different types of hot dogs – many of which are named after the stand’s celebrity clientele – and a dozen different hamburgers. 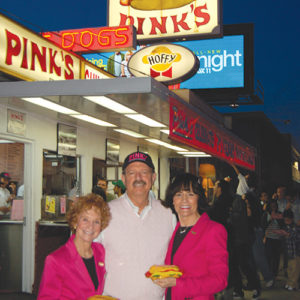 Beverly Pink Wolfe (left) and Richard and Gloria Pink have continued the family business for 78 years. (photo by Edwin Folven)

“Everybody loves hot dogs and it’s a special month,” Pink said. “It’s the one food that everyone in America celebrates with. With the America the Beautiful Dog, the Fourth of July lasts the entire month.”

Pink’s chili cheese dog was also recently named “Best in California” by People Magazine in its May 28 issue. The honor was part of an article in which the magazine sampled hot dogs throughout the United States. Pink encouraged everyone to visit the stand and enjoy one of America’s favorite foods. The stand is open Sunday – Thursday, 9:30 a.m. until 2:00 a.m. Friday and Saturdays 9:30 a.m. until 3:00 a.m.