The Music Center presents the Los Angeles premiere of the live overnight performance of Max Richter’s “SLEEP,” one of the longest single pieces of classical music ever to be recorded and performed, in Grand Park on Friday, July 27, and Saturday, July 28. 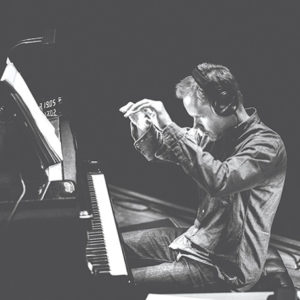 Max Richter’s music has been featured in a variety of acclaimed films and television series. (photo © Rahi Rezvani)

Following its recent successes in New York City and at SXSW, “SLEEP” will be performed outdoors for the first time as the first overnight event to be held at Grand Park.

Cots will replace traditional seating to allow attendees to immerse themselves in the eight-hour experience. The concert, featuring Richter playing the piano and keyboard along with the musicians on the 2015 Deutsche Grammophon recording of the work, American Contemporary Music Ensemble and soprano Grace Davidson, will begin at 10:30 p.m. on both Friday and Saturday evenings and conclude at 6:30 a.m. the following mornings. The Music Center’s presentation is supported by the Ring-Miscikowski Foundation and The Ring Foundation.

Richter is known in the United States for his work in feature films. His music is featured in “Hostiles,” directed by Scott Cooper; “Miss Sloane,” directed by John Madden; and “Taboo” for Tom Hardy, which earned him an Emmy nomination. Richter’s work “On The Nature Of Daylight” is used as the opening and end theme in Denis Villeneuve’s Oscar-winning film “Arrival.”

Tickets for the performance start at $60. The cot is included with ticket purchase and will be assigned in advance. There will also be a public area at Grand Park’s Event Lawn featuring a free listening area with no cots; tickets are required for admission.  Grand Park is located at 200 N. Grand Ave. For tickets and information, visit musiccenter.org/sleep, or call (213)972-0711.